The average monthly gain in U.S. total employment last year was +180,000. Early 2017 has sped past that signpost. According to the latest Employment Situation Report from the Bureau of Labor Statistics (BLS), net new jobs creation in January of this year was +227,000. 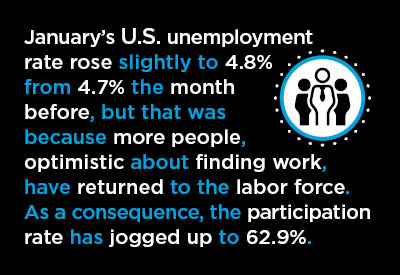 January’s unemployment rate, however, rose slightly to 4.8% from 4.7% the month before, but that was because more people, optimistic about finding work, have returned to the labor force. As a consequence, the participation rate has jogged up to 62.9% from 62.7%.

The average hourly wage for all workers throughout the economy in January eased back to +2.5% year over year from +2.8% in December. For only production workers and nonsupervisory personnel, the gain was +2.4%, down from +2.5%.

Average weekly earnings for all workers were +1.9% year over year, versus +2.5% the month before, and for the segment of the workforce not including bosses, the climb was +2.1%, which was a little better than December’s +1.9%.

The combination of a marginally higher unemployment rate and moderation in wage gains, helping to keep inflation in check, will provide justification for the Federal Reserve to continue its slow and cautious approach to raising interest rates.

A dampening of expectations that hikes in yields might need to be accelerated will be welcome news for firms engaged in selling exports and who worry about the possibility of another surge in value of the U.S. dollar.

The construction sector recorded one of its best months for hiring in almost a year. The number of on-site ‘hard hat’ workers shot up by +36,000. Much of the new work (+20,000) was engaged in the building of houses. The increases in nonresidential building and heavy/civil engineering construction were more restrained, +9,000 and +6,000 respectively.

Average hourly earnings in construction were better than for all jobs, +3.2% including supervisory personnel and +3.5% for nonsupervisory personnel. Due to the current season of the year, when cold and blowy wintry weather can limit hours spent on jobsites, average weekly earnings in construction were only +2.2% year over year including bosses and +1.9% leaving them out of the calculation.

Sectors other than construction that contributed large month-to-month jobs increases in January were: ‘retail trade&rsquo,; +46,000; ‘professional and business services,’ +39,000; ‘leisure and hospitality&rsquo,; +34,000; and ‘financial activities&rsquo,; +32,000.

In ‘retail trade,’ clothing and clothing accessory stores upped their staffing the most, +18,000. Employee counts at ‘building material and garden supply’ stores barely budged at all, +2,000.

In ‘professional and business services,’ it was ‘temporary help services’ (+15,000) and ‘computer systems design and related services’ (+13,000) that took on the most new employees.

‘Food services and drinking places’ (+30,000) accounted for almost all of the jump in ‘leisure and hospitality’ employment.

And ‘finance and insurance’ (+20,000) and ‘real estate and rental and leasing’ (+12,000) were the major contributors to buoyant hiring in the ‘financial activities’ sector. The post-election euphoria in stock markets has largely derived from enthusiasm concerning the improved prospects − under the new Trump Administration − for banking and insurance companies.

‘Education and health services’ employment rose by +24,000 jobs in January. ‘Health care’ was up by +18,000 jobs, but hospitals – which had been reliably adding staff for about two years – softened their recruiting, +4,000. Uncertainty concerning how the new government in Washington will alter the delivery and funding of medical care will put a lot of decisions on the back burner for a while.

Still, it’s interesting to note the locations in the country where the number of hospital jobs has been rising the speediest. State employment figures run a month behind the national numbers. Therefore, in the following assessment, the year-over-year results are for December 2016 versus December 2015.

In seven of the 12 months of last year, the number of American manufacturing jobs declined. President Trump and his advisors will be delighted to learn that in January of this year, the number of production line positions increased, although the gain was relatively small, +5,000.

‘Motor vehicle and parts’ employment was +3,000 in the latest month.

As job creation in the overall economy continues to set a commendable pace and earnings growth contributes to greater confidence, it will be interesting to discover whether the current strength in auto demand, which has given signs of plateauing, will be ignited into renewed fervor.

As an indication that the dark clouds in the resource sector may finally be dispersing, the not seasonally adjusted (NSA) unemployment rate in ‘mining, quarrying and oil and gas extraction’ improved to 6.8% in January from 8.1% 12 months prior. Copper and oil are two key commodities where supply and demand have come into better balance and prices are recovering.

Significant factors that have served to tighten some supplies, beyond gradual pickups in global demand, have been capacity reductions and a renewal of efforts to manage output (i.e., OPEC).

Total U.S. employment in the latest month was +1.6% year over year. Private services-providing work was ahead by +2.1%.

In the race to generate jobs, construction (+2.6% y/y) was among the fastest industrial subsectors, although it was almost matched by ‘education and health services’ (+2.5%), ‘financial activities’ (+2.3%), ‘transportation and warehousing’ (+2.2%) and ‘leisure and hospitality’ (also +2.2%), and it was beaten by ‘professional and business services’ (+2.9%).

The fact that six industrial subsectors have year-over-year jobs growth rates that lie in a narrow but healthy range of +2.2% to +2.9% demonstrates that there’s a good deal of breadth to the economy’s current expansion path.

The level of government jobs in January was +0.7% y/y.