The table accompanying this article records ConstructConnect’s hospital construction starts in all states of the U.S. and in the provinces and regions of Canada. On the left-hand side of the dividing line in Table 1 are annual average starts levels for the six-year period 2010 to 2015 inclusive, plus the average annual percent changes for the same time frame. 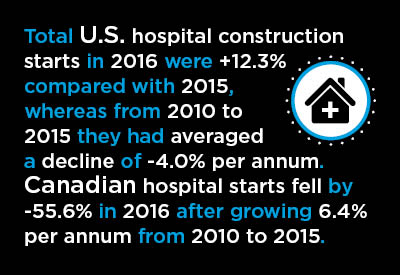 The right-hand side of Table 1 records the dollar volumes of hospital starts in each state and province/region in the single year, 2016, and how those levels compared with 2015.

Provision of a little historical context is warranted. After the introduction of the Patient Protection and Affordable Care Act (PPACA) in the spring of 2010, U.S. hospital construction starts, which were already trending down from their most recent peak in 2008, continued to slide through 2014. Hospital administrators remained unsure about their sources of revenue and about whether the PPACA would survive numerous legal challenges.

When the Supreme Court, in the summer of 2015, ruled in favor of the legitimacy of Obamacare, an uptick in hospital construction starts was launched that carried through last year.

Of course, with the Republicans now controlling both the White House and Congress, the uncertainty concerning the future structure of U.S. health care has resumed.

In Canada, with the onset of the Great Recession in late 2008, the federal, provincial and municipal governments came together to co-operate in carrying out an infrastructure capital spending program to provide fill-in support for the hard-pressed economy.

Much of that infrastructure spending was directed towards so-called ‘softer’ projects in the education and health care areas, with hospital construction receiving a particular boost. A sharp peak in hospital starts/groundbreakings was achieved in Canada in 2011. (Streets, highways, sewers and water mains are sometimes referred to as ‘hard’ infrastructure.)

With the strong front-end loading of hospital starts in the 2010-2015 period, Canada’s per annum rate of growth was +6.4% for six years. But in 2016, numerous type-of-structure construction categories in Canada suffered steep declines and the ‘hospitals’ segment was no exception. In dollar volume terms, Canadian hospital starts last year fell by -55.6%, or more than half.

In 2016, the South ($7.1 billion) was still out front, and the Northeast ($2.0 billion) continued to sit at the back of the pack, but the Midwest ($4.2 billion) and West ($4.1 billion) switched places for second and third spots respectively.

In Canada, Ontario ($1.2 billion CAD) accounted for the most hospital construction starts on an annual-average basis from 2010 to 2015. Quebec ($0.8 billion) placed second.

British Columbia (+28.4%) and Manitoba (+26.6%) were the only two provinces that managed year-over-year percentage increases in hospital construction starts in 2016.

As a technical note, many of the percentage changes appearing in Table 1 are outsized, up or down. Some of the extreme volatility can be explained by the presence or absence, from one period to another, of large project initiations.

Or, in the case of big jumps upwards, it may be that the denominator (i.e., the base value) in the mathematical calculation is quite low.