This is the fourth article in a ‘Handy Reference Guide’ series that has previously highlighted ConstructConnect’s construction starts statistics for roads, hospitals and educational projects. 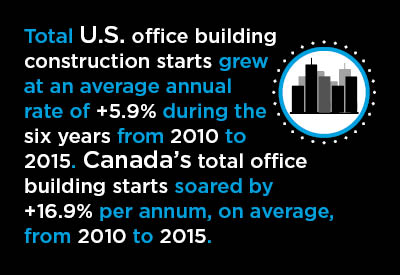 This time it is office building work that is under the microscope with the accompanying table setting out results for all states in the U.S. and almost all the provinces of Canada. The findings for the four jurisdictions on Canada’s East Coast – Newfoundland and Labrador, Prince Edward Island, Nova Scotia and New Brunswick − are combined in the Atlantic Region.

The left-hand side of the dividing line in the table sets out annual average volume levels for the six years from 2010 to 2015, as well as average annual percentage changes. The right-hand side shows results for the most recent year, 2016, both with respect to dollar volume levels and year-over-prior-year improvements (or deteriorations).

The volumes in the table are the summations of private offices and government offices. The former usually accounts for a larger percentage of the whole in the U.S., ranging from a low of just over 50% to a high of about 70% over the past seven years.

In Canada from 2010 to 2015, the private component of total offices recorded greater variability, swinging from 40% to 80%. Within the context of a poor economic climate north of the border in 2016, − due largely to weak commodity prices, especially for oil – the private-to-public split last year was an abnormal 33% to 67%.

The problem can be easily perceived when one considers the following circumstance. According to several major commercial real estate research firms, the office vacancy rate in Calgary – home to the second highest (i.e., behind only Toronto) concentration of head offices in Canada – has presently skyrocketed to 25.0%.

A figure of 10% is usually taken to be a good benchmark for when office supply and demand are  in reasonable balance, although the yardstick for suburban space is almost always looser (i.e., plus 300-to-500 basis points, where 100 basis points = 1.00%) than for downtown cores.

Returning to the results in the table, total U.S. office building construction starts grew at an average annual rate of +5.9% during the six years from 2010 to 2015. In 2016, they more than doubled that pace, increasing to +14.3% year over year.

What about the geographical distribution of starts? On average from 2010 to 2015, the largest dollar volume of office building construction starts occurred in the South Region ($8.4 billion USD), although both the Northeast ($6.9 billion) and the West ($6.7 billion) stayed in the hunt for top spot. The Midwest ($3.6 billion) was a laggard relative to the frontrunners.

Two provinces achieved upticks in 2016 relative to 2015: Manitoba (+196.9% or a tripling of its office starts volume) and Ontario (+33.9%). The large percentage gain in Manitoba was mainly a mathematical anomaly. 2015’s base level (i.e., as the standard for comparison) was so low as to be almost insignificant.

According to CBRE Research, Toronto currently has the tightest office vacancy rate in its core district, 4.4%. Vancouver and Winnipeg also have limited empty ‘cubicle’ space, at 7.7% and 8.9% respectively.