Two previous articles shone spotlights on ConstructConnect’s U.S. and Canadian starts statistics, first for ‘roads’, then for ‘hospitals’. They both also stressed the words ‘handy reference guide’ in their headlines. 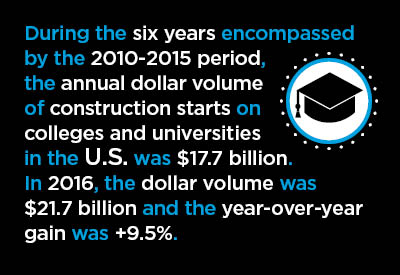 In this current story, plus the next one, there will be a concentration on school construction starts.

The following looks at the U.S. market, with a separation between ‘lower’ and ‘higher’ education. It would be desirable to do the same for Canada, but that’s not possible. Going forward from January 2017 on, there will be unique numbers for elementary and secondary schools versus colleges and universities in ConstructConnect’s Canadian data set. The history, though, is only for ‘total educational’. (The next article will feature ‘total educational’ starts in both the U.S. and Canada.)

The right-hand side is for the latest full year, 2016. The dollar volume level last year was $43.0 billion and the year-over-year percentage change was an expansive +9.8%.

The layout of accompanying Table 2 is the same as for Table 1, but with the starts statistics pertaining to higher education rather than the lower grades.

During the six years encompassed by the 2010-2015 period, the annual dollar volume of construction starts on colleges and universities was $17.7 billion. The annual average percent change was +8.1%, which was quite an improvement on the no-growth (+0.2%) scenario recorded by ‘lower’ education.

In 2016, the dollar volume of construction starts on colleges and universities in the U.S. was $21.7 billion and the year-over-year gain was +9.5%.

It’s an interesting fact – yielding a memorable ‘rule of thumb’ – that in 2010-to-2015 on average, and again in 2016, there was an almost exact two-thirds versus one-third split between lower education and higher education construction starts in the U.S.

Elementary and secondary school starts (plus a small volume of ‘specialty’ school work) made up 67% of total educational starts on average between 2010 and 2015 and again in the individual year of 2016.

Colleges and universities accounted for the other 33%.

The fact that higher education is proceeding with capital spending at a rapid pace can perhaps be explained in several ways. First, private sector enterprises are increasingly teaming up with experts in the academic world to establish cutting-edge research facilities.

Second, alumni that have become newly rich, often in some high-tech or frontier-science realm, are thanking their alma maters with generous financial gifts. They are often rewarded by having their names attached to new faculty buildings.

And third, record-blazing stock market appreciation has had the positive effect of boosting what are often already substantial endowment funds.