A Handy Roadbuilding Reference Guide – Starts in All States and Provinces

The table accompanying this article shows the dollar volumes of roadbuilding starts for all states in the U.S. and all provinces in Canada. The left-hand side of the dividing bar in Table 1 focuses on annual average dollar volume levels for the six-year period 2010 to 2015, also including annual average percentage changes. The right-hand side shows dollar volume results for last year, plus 2016 versus 2015. 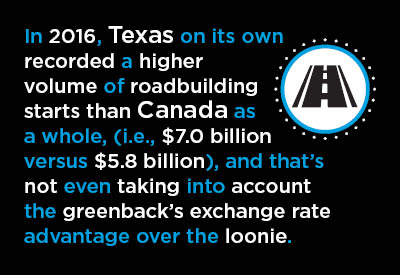 The figures are drawn from the Forecast (and ‘Actuals’) module of ConstructConnect’s ‘Insight’ platform on the Web.

How complete is ConstructConnect’s coverage of the roadbuilding sector? A good approach to answering this question is to make a comparison with the Census Bureau’s relevant capital spending put-in-place (PIP) numbers.

The starts figures won’t be as high as the PIP numbers because they are built up from individual projects and some work will inevitably be missed. For the PIP data series, because it plays a role in the gross domestic product (GDP) calculations carried out by the Bureau of Economic Analysis (BEA), estimations must be made by the Census Bureau to attempt to capture the ‘universe’, including smaller undertakings and activity in every corner of the country.

To sidestep the timing difference between ‘starts’, which are entered when ground is broken, and the PIP statistics, which essentially measure workflow or progress payments as structures are assembled, three-year averages were set side by side. ConstructConnect’s total U.S. roadbuilding starts came to approximately three-quarters of the PIP street and highway investment numbers.

But it was the West, perhaps recognizing a need to do some catching up after performing so sluggishly earlier, that led regional percentage gains in 2016, with a +14.6% jump. In second place was the South, at +8.7%. The Northeast and Midwest experienced declines in roadbuilding starts in 2016 versus 2015, -1.9% and -14.5% respectively.

Among the states, it’s the ones with the largest population counts that generally lead in street and highway starts volumes. For the full seven years covered in Table 1, Texas was notably way out front of all its siblings.

Florida, Ohio, Pennsylvania and Illinois are in a tier that appears just below Texas and California in the roadbuilding dollar-volume rankings. New York, North Carolina and Georgia are also prominent.

In Canada, Ontario is usually the leader among the provinces in roadbuilding starts. That province’s $2.9 billion CAD figure on average from 2010 to 2015 was more than double second-place Alberta’s $1.3 billion. In 2016, the disparity was even wider, $2.6 billion for Ontario compared with $795 million for next-best Alberta.

As was the case in so many categories of construction, roadbuilding (-26.5% nation-wide) had an exceptionally bad year in Canada in 2016. The only province that managed to achieve an increase in starts was British Columbia, +13.5%. Four provinces or regions suffered declines of nearly one-third of more: Ontario, -32.3%; Manitoba, -35.7%; the Atlantic, -38.8%; and Saskatchewan, -39.3%.

There is a final point of interest to bring to the attention of readers. In 2016, Texas on its own recorded a higher volume of roadbuilding starts than Canada as a whole, (i.e., $7.0 billion versus $5.8 billion), and that’s not even taking into account the greenback’s exchange rate advantage over the loonie.