Tables 1 and 2 accompanying this article set out and rank year-over-year jobs growth rates and unemployment rates for 50 of America’s largest (i.e., according to population) cities. 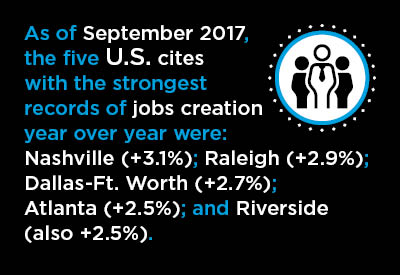 The ranking of jobs growth rates goes from fastest to slowest. The ranking for unemployment rates is from lowest to highest.

The ten cities with shading are the truly outsized metropolitan statistical areas (MSAs) in the country. A separate ranking for them, on their own, will be discussed at the end of this piece.

Notice that all those cities, other than Riverside, are in the southern U.S.

Appearing at the bottom of Table 1 are four cities that have experienced declines in employment year over year: Hartford (-0.1%); Buffalo (-0.6%); Rochester (also -0.6%); and Virginia Beach (-1.2%). In the foregoing, the state of New York is represented twice.

True to its country-music heritage, although it is also now a major force in the delivery of health care services, Nashville is a star. It is the only city to appear among the best for both jobs growth and jobless rate.

In Texas, the cities of Austin, Dallas-Fort Worth and San Antonio all remain not too far from the tops of the leader boards in both Tables 1 and 2. Houston, however, ravaged earlier by energy sector woes and more recently by Hurricane Harvey, has slipped badly.

And while Detroit (4.4%) and Las Vegas (5.2%) still have poor unemployment rates, they can take solace from how much their jobs growth performances have improved. Las Vegas (+2.4%) is tied for a sixth-place ranking in Table 1 and Detroit (+1.8%) is in nineteenth spot.

For the ten largest MSAs in the country, a composite ranking has been calculated. First, each city’s rankings from Tables 1 and 2 were averaged. Then those average rankings for each city were themselves placed in order.

According to this composite measure, the number (1) big city with the healthiest labor market is Dallas-Ft. Worth. Rounding out the Top 5, in sequence, are: (2) Boston, (3) Atlanta, (4) Washington and (5) Philadelphia.

Based on average of latest three months, unadjusted data.
When the ranking numbers are the same, the cities are in a tie.
Data source: U.S. Bureau of Labor Statistics.
Tables: ConstructConnect.