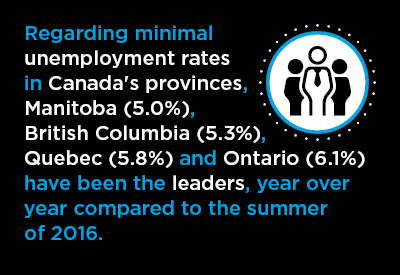 An eighth measure is also included, the unemployment rate, but it is a ‘level’ rather than a growth rate.

To compare how the provinces are doing relative to each other, Chart 2 rearranges the results from Chart 1 in a ‘heat’ graphic. The methodology is as follows.

In each column of Chart 1, when the percent change number is equal to or higher than the Canada-wide figure, the relevant ‘cell’ is highlighted in yellow (for ‘warm’).

When the percent change number is less than the national number, the choice of color for the cell is blue (for ‘cool’).

There is one exception. For the jobless rate, a level lower than the country-wide figure is more desirable (and therefore encased in yellow) than a higher one (captured in blue).

With respect to population growth, almost all the fastest year-over-year gains have been occurring from Ontario heading west. Manitoba (+1.6%) is currently leading the nation.

In year-over-year housing starts, it’s primarily the eastern provinces that have been recording the largest percentage climbs – although Manitoba (+61%) and Alberta (+28%) have also been standouts.

Strength in jobs creation has displayed good geographic diversity, hop-scotching across the country from Prince Edward Island (+2.9%) on the Atlantic coast; with Quebec (+3.0%) as the next stop; then on to Manitoba (+2.1%) in the middle; and finishing in B.C. (best of all at +3.6%) on the Pacific shoreline.

Best weekly earnings gains have been weighted more towards the West than the East, with only Alberta (+1.7%) among the Prairie Provinces failing to reach Canada’s overall increase (+2.0%).

In exports, a year-over-year crude oil price pick-up has enabled Alberta (+42.7%) and Newfoundland and Labrador (+40.6%) to realize outsized percentage jumps in their foreign energy product sales. B.C. (+23.9%), New Brunswick (+17.8%) and Saskatchewan (+16.0%) have also benefitted from international commodities demand that is showing some spark again.

Chart 2 summarizes the results from Chart 1.

Chart 2 records how many yellow versus blue squares there are for each province. (Note that there are no column heads. All that has happened in each row is that like-colored squares have been bunched together.)

Vertically in Chart 2, the provinces are ordered – or, in essence, ranked − by how many yellow squares they have. The result is a ‘heat’ graphic.

All four Atlantic Region provinces, plus Saskatchewan, are in the grips of a chill.

Quebec, Ontario and Alberta are at room temperature.