Jobs per $1 Billion of Infrastructure Construction…and the Wall

The governments of both the U.S. and Canada are expressing their determination to proceed with amplified infrastructure spending programs. A related question that is often being asked is, “How much extra employment will be created?” 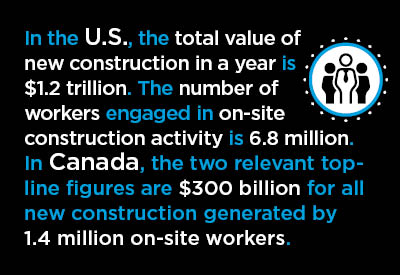 Two approaches to an answer are set out below. The first utilizes macro numbers. The second relates material costs to incomes. Both employ broad strokes and neither is definitive. The results are interesting nonetheless.

(1) In the U.S., the total value of new construction in a year – as recorded in the Census Bureau’s put-in-place investment figures − is $1.2 trillion. The number of workers engaged in onsite construction activity as reported by the Bureau of Labor Statistics (BLS) is 6.8 million.

A simple exercise in division therefore suggests that for each $1 billion of U.S. construction work, there are 6,000 man-years of employment.

In Canada, the two relevant top-line figures are $300 billion for all new construction generated by 1.4 million onsite workers. The math for north of the border works out to an upwardly rounded 5,000 jobs per $1 billion.

Varying types-of-construction have different job mixes. For example, residential work is likely to be more labor intensive than most engineering/civil projects. The labor input in the latter will usually involve fewer, but more highly skilled tradespeople.

Being a somewhat conservative analyst myself, I’m going to hypothesize that $1 billion of construction leads to 5,000 direct onsite jobs.

But that is by no means the whole story…

The above numbers are only for ‘hard hat’ or ‘in the field’ work. What about all the workers who are involved in production line operations for building product manufacturers?

And even after all those individuals are included, the employment effect is still being vastly understated.

Adopting a wider perspective, the number of jobs created by $1 billion of construction almost certainly doubles to at least +10,000 man-years.

And there are further ancillary job effects that arise from construction earnings being spent at the movies, buying restaurant meals, purchasing a new motor vehicle, paying for petrol and so on.

(2) A second approach to figuring out jobs-per-$1-billion-of-construction is to look at earnings.

There’s a way in which the cost of construction bears a close similarity to taking one’s automobile to a garage or dealership for repairs. Approximately half the cost will be for materials and the other 50% will go towards labor.

A $1 billion construction project will involve spending (roughly) of $500 million for labor.

The figure for Canada is in the same ballpark.

For the kinds of highly skilled workers who are employed on some major infrastructure projects, annual earnings of at least $80,000, on average, would be more realistic. $500 million divided by $80,000 yields the same 6,000 jobs number that was calculated in part (1) of this article.

Plus, once again, there are all the additional jobs in manufacturing, and with design services, legal, accounting and real estate firms to take into account.

My bottom line conclusion is that for each $1 billion of construction, there are at least +5,000 direct man-years of employment, which grows to +10,000 when the net is cast wider.

But let me now shift focus slightly and say that the whole discussion of the job creation that goes hand in hand with infrastructure work is a source of big frustration for me. Too often one hears a commentator downplay the importance of building new infrastructure on the grounds that such work accomplishes only one thing − to create a temporary bump in construction employment.

No, that’s not the point of spending money on infrastructure at all. I’ve written before that modern economies have become largely governed by logistics. The nature of almost all human activity these days is to move people, goods and services in a manner that is faster, cheaper, safer and greener.

In such a context, infrastructure initiatives have become synonymous with efforts to achieve productivity improvements.

Having said the foregoing, there’s a significant anomaly in the fact that the largest proposed infrastructure project in North America – i.e., the boundary wall that the Trump Administration will be attempting to erect along America’s southern border with Mexico – may or may not lie within the scope of productivity considerations. Just the same, a hotly contested decision in favor of the wall was worked out in the political forum of last fall’s Presidential election.

The most commonly quoted estimated cost of the wall appearing in media articles is $21 billion.

Anyone who has worked in construction for a while knows that the final tally for a mega project will often far exceed its first estimate. But that’s subject matter for a future ‘hindsight’ story.

A figure of +200,000 for total employment creation month to month, when it is reported in the Labor Situation Report issued by the BLS, is judged to be a very good performance for the U.S. economy as a whole.

Therefore, +200,000 jobs from a single construction project, all on its own, − although, admittedly, with the work spread out over an extended period of time, − would be a truly extraordinary circumstance.

Construction managers are already complaining about a shortage of workers. The distortions to be introduced from placing extra demands on the labor force, while also imposing a strain on building material supplies (e.g., of steel and/or concrete), are worrisome to contemplate.

The wall may also set new records in running up legal fees as private owners of property along the border try to block the exercise of force majeure to expropriate their land.

It really is all rather mind-boggling.