Soon after the turkey is carved and consumed as part of the American Thanksgiving ritual, Black Friday and Cyber Monday launch the holiday shopping season. 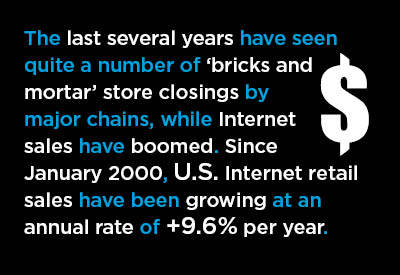 Many shopkeepers depend on their November and December revenues and profits to stay afloat from January through October.

The last several years have seen quite a number of ‘bricks and mortar’ store closings by major chains, while internet sales have boomed.

Nevertheless, retail construction has held up fairly well, as demonstrated by both the Census Bureau’s put-in-place statistics and ConstructConnect’s ‘starts’ data.

The reason for ongoing retail facility expansions can be credited to buying strength across more storefront categories than might be supposed.

In October, U.S. total retail sales, as calculated by the Census Bureau, were +4.3% year over year. Leaving out sales at gasoline stations, they were +4.6%. Steep drops in the price of gasoline have been depressing total retail sales for the past two years. This effect is about to dissipate as the global price of oil steps gingerly onto a gradual upward-sloping path.

Motor vehicle and parts dealerships (+5.4% year over year in October) have played a major role in boosting total retail sales. The auto sector share of total U.S. retail sales is slightly over 20%. (Used car dealers, at +8.1%, are having an especially good year.)

Another subcategory of retail shopkeepers with good news to report is ‘building material and garden equipment suppliers’, +6.5% year over year. This segment of retail has an obvious symbiotic relationship with construction activity, especially new and renovation residential work.

By the way, while Canadian total retail sales – as reported by Statistics Canada, but with a one-month lag versus their U.S. counterpart numbers – are demonstrating less vitality, +2.5% year over year, they are exhibiting a similar pattern of strengths and weaknesses among sub-portions.

For example, ‘health and personal care’ stores in Canada are enjoying +7.7% year-over-year sales growth.
Canadian ‘building material and garden equipment suppliers’ are ringing up cash register sales to the tune of +6.5% year over year, the same as south of the border.

Sales by Canadian motor vehicle and parts dealers are +3.6%; and by used car dealers on their own, +4.9%. The car and light truck segment of total retail sales north of the border is 25%.

Mentioned earlier was how extraordinary U.S. web-based retail sales have been. Graphs 1 and 2 for ‘electronic shopping and mail order houses’ explore this trend.

The monthly sales shown in Graph 1 are adjusted for both seasonal and number-of-trading-day differences (e.g., on account of holidays) between the months of the year.

The growth in Internet retail sales has been remarkably consistent. An exponential curve fitted to the actual numbers in Graph 1 has an R2 value of 0.99. (R2 is an econometric regression term that ranges from 0.00, which means no ‘fit’, to 1.00, which signifies a perfect ‘fit’).

Since January 2000, U.S. internet retail sales have been growing at an annual rate of +9.6% per year.

Graph 2 features data that has not been seasonally adjusted. It establishes how important the gift-giving last month of each year is to web-based retail providers.

The sharp peaks in each year include foothills-sized upward jogs in November that become truly mountainous in December. Furthermore, the ‘spike’ effect has turned more pronounced in the most recent years.

December sales as a percentage of average sales during the earlier months of each year are now higher by more than half.

They are also +50% when compared with what their month-to-month trend line sales would have otherwise projected.