The U.S. Census Bureau recently released updated population counts for U.S. states. The date for the official numbers is always July 1 of any given year. Therefore, the latest figures are for July 1, 2018.  This article will first set out some of the highlights and then delve into the detail. 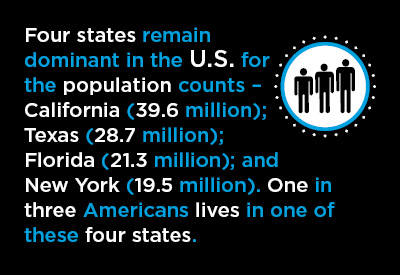 (1) Whether year-over-year percentage changes in population are calculated for latest year, latest two years or latest three years, the same three states – Nevada, Idaho and Utah – have led the country.

(2) Over the past three years, two states have added more than one million residents each – Texas and Florida.

(4) The latest one-year population change for the entire U.S. has been +0.62%, or +2.0 million people in nominal terms. From a construction point of view, it’s worth noting that an extra couple of million inhabitants is the equivalent of adding two new Metropolitan Statistical Areas (MSAs) to the landscape.

(5) During the latest year, the South and West Regions have tied for fastest population growth, +0.9% each; the Midwest (+0.2%) and Northeast (+0.1%) have experienced only minimal gains.

With respect to level of population, there is still considerable separation between the front four and fifth-place Pennsylvania (12.8 million), followed by sixth-place Illinois (12.7 million).

One in three Americans lives in one of the four frontrunners. But while Texas, California and Florida are continuing to add citizens, New York is not. New York has shed 119,000 residents over the past three years and nearly 50,000 over the past year alone.

In nominal terms, Texas has been adding more people than Florida over both the latest three years (+1.2 million vs. +1.1 million) and the latest year (+379,000 vs. +323,000). What’s also interesting, though, is that both Texas and Florida have had nominal increases about double what California has encountered.

But those three states have relatively small population counts (i.e., slightly over 3.0 million for Utah and Nevada and a little less than 2.0 million for Idaho.) A smaller base makes it easier to achieve a larger percentage-change jump.

Those same six states are also within the Top 15 for percentage changes, whether it be over three years, two years or one year, with Arizona, Colorado and Washington especially strong.

Availability of jobs in cutting-edge/high-tech industries and/or more appealing weather are often the draws that attract population flows. (In turn, population increases translate into all manner of construction undertakings.)

There has been essentially no population change over the latest year in Connecticut, Kansas and Rhode Island.

Accompanying this article are two maps. The first map, with various shades of green (see legend), shows the 17 states, plus District of Columbia, where population growth over the latest three years has been greater than the total U.S. percentage change of +2.0%.

The second map, with various shades of blue and gray, shows the 33 states where the rate of population change over the past three years has been either equal to or less than the national figure of +2.0%.

Blue shadings in Map 2 are for states with three-year population changes lying between 0.0% and +2.0%. While advancing more slowly than the ‘green’ states in Map 1, they have still been on the positive side of the ledger.

Gray shadings in Map 2 are for states with negative population change over the latest three years.