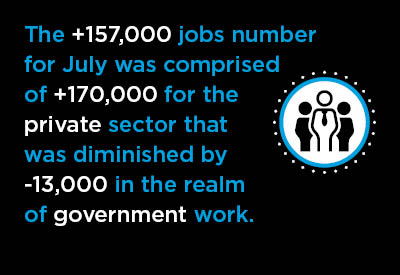 Manufacturing and Construction Both Winners in U.S. July Jobs Report

The lead paragraph of the Bureau of Labor Statistics (BLS)’s July Employment Situation report highlights that total nonfarm payroll employment in the U.S. rose by 157,000 jobs during the latest month.

Historically, the U.S. unemployment rate never falls much lower. The last time it was 3.8% was in April of 2000. Eighteen years have passed since then.

The seasonally adjusted (SA) unemployment rate through the first seven months of this year has averaged 4.0%. During the same time frame of last year, it was 4.5%.

Furthermore, there’s another good news story embedded in the latest Employment Situation report that is likely to be overlooked – upwards revisions to previous months data.

Therefore, comparing July’s currently estimated employment level of 149.128 million jobs with what was previously reported for June (148.912 million) yields an improvement of +216,000 jobs.

Plus, there’s an additional interesting observation to be made. The +157,000 jobs number for July was comprised of +170,000 for the private sector that was diminished by -13,000 in the realm of government work.

In other words, if government employment had simply stayed steady, the headline number for July jobs creation would have been +170,000 jobs.

Among industry sub-sectors, manufacturing was a standout on the jobs creation front in the latest month. Production-line positions rose by +37,000 in July. Average monthly hiring by manufacturers (+28,000) this year has nearly tripled versus last year (+10,000).

While the nominal increase in construction jobs in July, at +19,000, was only half the gain registered by manufacturing (+37,000), it was a decent climb nonetheless. Average monthly ‘hard hat’ employment through July of this year has been +24,000 jobs, comparing quite favorably (+51.8%) with last year’s January-July figure of +16,000.

Construction is outshining manufacturing in two ways. First, its year-over-year jobs increase is higher, +4.4% compared with +2.6%. Second, its not seasonally adjusted (NSA) unemployment rate is presently lower, 3.4% versus 3.8%.

July is the height of the construction season and activity in the industry should be at its annual peak. Nevertheless, a 3.4% jobless rate in the sector is noteworthy. It’s hardly ever the case that construction’s unemployment rate falls below the all-jobs rate (3.8%).

Clearly, when construction firms say they are having difficulty finding workers, their words hold validity.

Compensation levels are also revealing with respect to labor availability. Contained within the Employment Situation report are two tables, B-3 and B-8, which set out average hourly and average weekly wage rates in each of the latest three months and in July of last year.

Table B-3 is for the entire workforce while Table B-8 limits coverage to production and non-supervisory personnel. In other words, B-3 includes bosses and B-8 does not.

For all jobs from B-3, average hourly earnings were +2.7% year over year and average weekly earnings were +3.0%. For construction work alone, the pay check advances were somewhat better, +3.2% hourly and +4.0% weekly.

Leaving out bosses (i.e., Table B-8), the economy-wide compensation increases in July were again +2.7% hourly and +3.0% weekly. Construction workers, however, had reason to be happier. Their bank accounts swelled by +3.6% hourly and +5.1% weekly.

As for other industrial sub-sectors with strong jobs growth in July, the frontrunner was ‘professional and business services’, +51,000, followed by ‘leisure and hospitality’, +40,000.

Within ‘professional and business services’, it was ‘temporary help services’ that was most aggressive in taking on new personnel, +28,000.

Appearing under the ‘retail’ designation, ‘building material and garden supply stores’ stood pat (0.0), with no movement in their number of employees.

‘Motor vehicles and parts’ (+6,000 jobs) accounted for about half of the updraft in ‘transportation equipment’ jobs.