Manufacturing Rates Highly According to One Important Metric

During the course of my somewhat lengthy career as an economist, I’ve found that when the subject of ‘productivity’ is brought up, audiences at conferences tend to fall asleep. 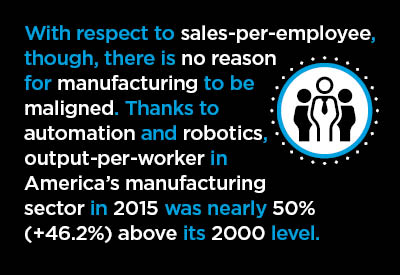 If it’s an article in which the word appears, the eyes of readers will glaze over and the page will be turned rather quickly.

Therefore, I’m going to (initially) address the question of the changing role of labor in a number of key industries in the economy in a manner that will be a little different from the norm.

I’ll be looking at constant-dollar receipts for each sector versus a number of employees and how that relationship has been transitioning over time.

The Bureau of Economic Analysis (BEA) publishes ‘real’ (i.e., inflation-adjusted) receipt or sales numbers for each of the sectors that make up industry-based gross domestic product (GDP).

The technical term for such receipts is ‘gross output.’ Included are sales to final customers, plus sales to other enterprises as part of a supply chain. In other words, there is an intermediate stage of selling that is not included in ‘value-added’ statistics. The latter is a concept I’ll shift to later.

As for the labor measure, I’ve taken the monthly average number of people employed (seasonally adjusted) in each industry as reported by the Bureau of Labor Statistics (BLS).

The sales-to-number-of-workers calculation has been made for each year from 2000 to 2015. (2016 information isn’t complete yet.)

The results are shown in Graphs 1 and 2. Since both sales and worker counts declined in 2008 and 2009, the effects of the Great Recession aren’t as prominent in the nine curves in the two graphs as they are for many other economic data series.

The curves (and underlying statistics) in Graphs 1 and 2 highlight the degree to which technological advances are allowing more output to be generated by relatively fewer workers.

To facilitate a comparison between the nine series, they have all been expressed as indices, with starting points in 2000 set equal to 100.0. The number in each subsequent year is then a ratio of the value in 2000.

It will come as no shock that the industry sub-sector which has achieved the greatest increase in sales-to-workers is ‘information services’, with a doubling (+100.2%) from 2000 to 2015.

Included in ‘information services’ are companies engaged in broadcasting and telecommunications, and in data processing and internet publishing. Those firms are on the cutting edge of innovation.

Second-best, though, is a once-formidable pillar of the economy, manufacturing, that has been subjected to voluminous bad press of late concerning its inability to retain workers and to keep up with the low-labor cost competition in other countries.

With respect to sales-per-employee, though, there is no reason for manufacturing to be maligned. Thanks to automation and robotics, output-per-worker in America’s manufacturing sector in 2015 was nearly 50% (+46.2%) above its 2000 level.

‘Retail trade’, ‘finance, insurance and real estate’, and ‘professional and business services’ have also made nice gains of between +20% and +30% in output relative to labor.

‘Transportation and warehousing’ and ‘education and health care’ have achieved minor upward adjustments in sales/receipts-to-labor of about +10%.

The ‘leisure and hospitality’ sector has hardly budged (+3.0%) and remains largely ‘hands on’.

Finally, there is one sector in which the ‘real’ volume of sales has diminished relative to its payroll, construction, -7.2% from 2000 to 2015. There have been significant technological advances at the design stage of construction and among building product manufacturers. But as for onsite activity, it would seem that nearly every project is still unique. Labor-saving modular opportunities continue to be quite limited.

The next several paragraphs are for theoretical purists. (If you’ve hung in this far, why not stick around till the end?) For each of the nine sectors, I’ve also calculated ‘productivity’ according to the academic definition. For each year, ‘value-added’ has been divided by man-hours. ‘Value-added’ is mainly sales/receipts (i.e., ‘gross output’) minus material and energy input costs. The sum of value-added for all individual industries is exactly the same as the nation’s total GDP.

An advantage of using man-hours data, which is also readily available from the BEA, is that there is an equivalency of treatment between part-time and full-time efforts.

With the single exception of ‘finance, insurance and real estate’ (+26.6%) moving ahead of ‘retail trade’ (+22.9%), the relationship between the sectors adopting the ‘official’ definition of labor productivity improvements stays the same as in the first-outlined methodology.

But it should also be noted that the ‘officially-defined’ measures for output-to-labor advances in ‘information services’ and ‘manufacturing’ between 2000 and 2015 are even more impressive, +170.5% and +65.2% respectively, and that the decline for construction is steeper, -17.2%. (One possible explanation for the drop is that employment and man-hour figures in the early 00s may have missed a large number of undocumented workers. The resultant increases in the front-end output-to-labor calculations would then apply a downward bias to more recent measurements.)