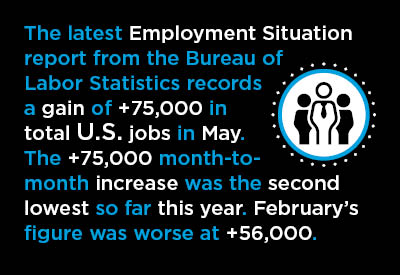 The latest Employment Situation report from the Bureau of Labor Statistics (BLS) records a gain of +75,000 in total U.S. jobs in May. The +75,000 month-to-month increase was the second lowest so far this year. February’s figure was worse at +56,000.

What’s hidden, however, unless one digs a little deeper, is the fact that total U.S. employment in May really didn’t increase at all. The total jobs number now being reported for May, at 151.095 million, is the same as the total jobs number that was published a month ago for April. The explanation lies in the fact that April’s number has been revised down by -75,000.

The national unemployment rate in May stayed extremely tight, at 3.6%, the same as in the previous April. The participation rate likewise remained steady, at 62.8%.

Neither the construction nor manufacturing sectors fared well in the latest jobs report. The former lifted payrolls by only +4,000 and the latter, by a similarly tepid +3,000.

Construction’s unemployment rate, though, was a miniscule 3.2%. A year ago, it had also been good (4.2%), but not as historically-low good as in this May.

Wages Moving Up at Snail’s Pace

The jobless rate in the U.S. economy may be about as low as it can go, but that still isn’t having much of an impact on nominal compensation.

For strictly production and nonsupervisory workers in the latest month, the hourly and weekly paycheck increases were +3.4% and +2.7%. Construction workers, as a subset within all workers and omitting bosses as well, stayed even with everybody else hourly, at +3.4%, but fell behind weekly, +1.9%.

Henceforth, at this late stage of the business cycle, weakness in jobs growth will be greeted with extraordinary alarm. The reason ties to another indicator which suggests a recession may be on the horizon. The metric inspiring negative conversation about the economy centers on what is termed an inverted yield curve.

The first couple of lines (i.e., for June 2016 and June 2017) in Graph 1 are ‘normal’ yield curves. The interest rates on Treasury Bills of less than one-year’s duration are considerably lower than on bonds that don’t expire for five, 10, and 30 years.

In the third curve (for June 2018), however, the slope is beginning to flatten, with short-term rates rising closer to long-term rates. The Federal Reserve, by then, had launched its ‘interest rate normalization’ initiative. (In theory, ‘normalization’ would move the policy-setting federal funds rate from near zero into a range between +2.5% and +3.5%.)

In the fourth curve (for early-June 2019), one-month, three-month, and six-month Treasury Bill yields have climbed to exceed yields on one-year, three-year, five-year, and ten-year government bonds. As noted earlier, this is not a common occurrence.

Why is Inversion so Worrisome?

Why is the early-June 2019 pattern in Graph 1 so worrisome? That question is most clearly answered in Graph 2.

Graph 2 plots the yield on three-month treasury bills and 10-year bonds since 1999. Gray vertical columns denote periods during which the economy has been in recession.

As is immediately apparent, there is correlation between when 3-month rates and 10-year rates move into alignment and when a recession quickly follows.

Turmoil on several foreign trade fronts has already led to speculation the Fed may feel compelled to soon lower, rather than continue lifting, interest rates. There is even conjecture there may be three such cuts.

One of the chief bulwarks arguing against such a measure has been the exceptional strength in the labor market. If that falters, then the Fed may indeed be forced to act.