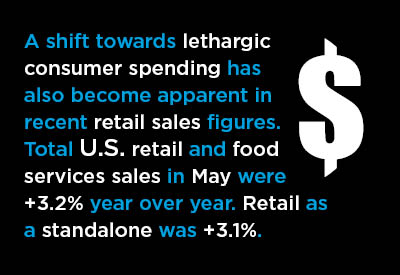 Immediately prior to the midpoint of 2019 − and where did the front half of this year go, you may well ask, since it went by so fast − there are the following economic nuggets from various private and public sector firms and agencies to be aware of and mull over.

In the ‘second estimate’ of U.S. Q1 2019 ‘real’ (adjusted for inflation) gross domestic product (GDP) published by the Bureau of Economic Analysis (BEA), the quarter-to-quarter annualized pickup was a strong +3.1%. Consumer spending, however, which usually plays a major role in GDP’s advance, was relatively quiet this time around. The Personal Consumption Expenditures (PCE) line item of GDP was only +1.3% per annum. It was soundly beaten by Gross Private Domestic Investment, +4.3%, and an improvement in net foreign trade, with exports +4.8% and imports, -2.5%. Investment was led by spending on intellectual property products, +7.2%.

A shift towards lethargic consumer spending has also become apparent in recent retail sales figures. Total U.S. retail and food services sales in May were +3.2% year over year. Retail as a standalone was +3.1% and ‘food services and drinking places,’ +3.7%. Less than a year ago, in July 2018, retail sales were +6.2% y/y and ‘restaurant, fast food, bar, and tavern’ sales, +9.6%.

Within retail, and as set out in Graph 1, several shopkeepers achieved May sales increases ranging from +3.1% to +3.7% y/y. ‘Health care and personal care stores’ rang up receipts of +3.4% y/y; ‘general merchandise stores’, +3.3%; and ‘gasoline stations,’ +3.2%. Gasoline station sales, despite drawing more from aligned variety store activities, can still be heavily influenced by fluctuations in the price of petrol. In the latest month, the price of gas was flat compared with 12 months prior, and therefore had a neutral impact on cash register receipts at service stations.

Notice from Graph 1 that the star among consumer outlets in May continued to be ‘non-store retailers,’ with y/y sales of +11.4%. The double-digit uptick of +11.4% for electronic auction houses and companies selling primarily over the Internet was more than three times greater than the second-place performance of +3.7% for ‘food services and drinking places.’

The Importance of Retail Trends for Construction

For firms dependent on construction, there’s an important reason to closely follow trends in retail. As web portal sales have greatly expanded their reach, there has been a corresponding diminishment in the need for new walkthrough square footage. Graph 2 shows the rapid and relentless way in which nonstore retail sales have caught up with and begun to surpass general merchandise store sales. Furthermore, the latter includes physical outlets, such as warehouse clubs and supercenters, that have been introduced specifically to entice consumers away from their cell phones and laptops to score bargains through the traditional shopping experience.

ConstructConnect is estimating that total U.S. put-in-place (PIP) construction spending in 2019 will reach $1.335 trillion, an uptick of +3.2% compared with 2018. The subcategory labeled ‘commercial’ work by the Census Bureau is likely to be just under $90 billion this year, or flat versus 2018. ‘Brick and mortar’ retail construction will almost certainly be down, but support will come from warehouse construction, which is another component of PIP ‘commercial’ work.

Adjusted for seasonal variation, holiday and trading day differences, but not for price changes.
Latest data points are for May 2019.
Data source: U.S. Census Bureau (Department of Commerce)/Chart: ConstructConnect.

U.S. Consumers may be easing back on the spending throttle, but it’s not as if they’ve been losing faith in the economy. May’s consumer confidence reading from the Conference Board rose to 134.1 from 129.2 in April, which was itself up from March. The index, with 1985 = 100 as a standard (i.e., sentiment in 1985 was neither too chipper nor too bleak), is near its best level in 18 years. CEO confidence, on the other hand, is more restrained. The Conference Board’s CEO confidence index, which had plummeted in Q4 of last year, was a little sprightlier in Q1 of this year, moving from 42 to 43. But it needs to be above 50 to indicate there are more positive than negative responses from CEO’s concerning their expectations for ongoing GDP expansion.

It’s been more than ten years now since inflation let out much of a roar (i.e., +5.6% y/y in July 2008) on the U.S. economic scene. Presently, it’s virtually comatose. The year-over-year change in the U.S. All items Consumer Price Index (CPI) this May was +1.8%. The ‘core’ rate of inflation in the latest month was +2.0% y/y. The ‘core’ rate ignores products, mainly in the food and energy spheres, that often display outsized price swings. A +2.0% increase for ‘core’ inflation is exactly on target with what most central bankers believe is optimal for inflation.

The Federal Reserve has no reason to raise interest rates to fight inflation. Nor does it have much justification for lowering yields to stimulate jobs. The unemployment rate is about as low as it can go. Nevertheless, speculation emanating mainly from stock market analysts is leaning towards there being at least one interest rate cut of 25 basis points (where 100 basis points equals 1.00%) from now until the end of 2019. The U.S. isn’t the only country where an adjustment in monetary policy is under consideration. The Reserve Bank of Australia (RBA) has embarked on an interest rate reduction program. The value of the Australian dollar has tumbled accordingly.

U.S. housing starts in May, seasonally adjusted and at an annual rate (SAAR), were 1.269 million units. Month over month, they were -0.9%, and year over year, -4.7%. On a monthly-average year-to-date basis, they have been 1.238 million units, a change of -5.5% compared with the first five months of 2018. Regionally, the South has been doing best so far in 2019, +3.5%. The other three major regions have all registered declines, with the Northeast down the least, -8.7%, and the West down the most, -16.8%. The Midwest has been -12.9%. Singles year to date have been -4.7%, with multiples -7.4%. Multiple-unit starts, though, have been on a gentle upward progression this year. While it’s widely accepted that the return-to-normal benchmark for U.S. total starts each month is 1.6 million units, they seem unable to break above 1.3 million.

As tight as the U.S. labor market has become, Canada’s employment numbers in May stood out on their own. In fact, they were better than America’s in three key percentage-change comparisons. With respect to total jobs, Canada was +2.4% y/y to America’s +1.6%. In services-providing jobs, it was Canada +2.5% and the U.S., +1.7%. And in manufacturing, +1.9% north of the border exceeded +1.5% to the south. Construction was a different story, +2.4% in Canada, but +3.0% in the U.S. In the latest month, three provinces – British Columbia, Saskatchewan, and Ontario − managed a commendable feat. Each had an unemployment rate lower than the national average (5.4%) and a percentage-change jobs increase greater than the national average (+2.4%).