Early in February, there should have been the release of December 2018 foreign trade statistics for both the U.S. and Canada. The publication schedule has been thrown off track, however, by the 35-day partial U.S. government shutdown, which kept Census Bureau workers off the job. 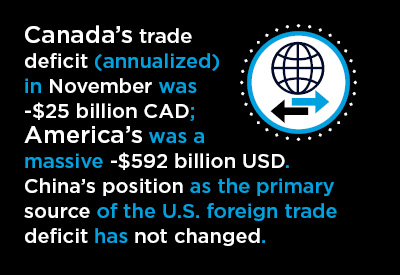 Since three-quarters of Canadian exports are shipped to the U.S. and two-thirds of Canadian imports are drawn from the U.S., Statistics Canada felt it could not publish accurate numbers either. Therefore, the latest statistics available for study, both south and north of the border, are for November. A statement has been issued that the target date for dissemination of December findings is March 6th.

Nevertheless, there is much to be learned from the material that is at hand. The bottom line is that there has been minimal progress lately in fixing significant U.S. and Canadian foreign trade difficulties.

Graphs 1 and 2 tell the story. Canada’s trade deficit (annualized) in November was -$25 billion CAD; America’s was a massive -$592 billion USD.

The last data point is for November 2018.
Based on seasonally adjusted monthly figures, projected at an annual rate.
Analysis of Canada's foreign trade position usually focuses on the Merchandise Trade Balance which is goods exports minus goods imports.
Data source: Statistics Canada/Chart: ConstructConnect.

The last data point is for November 2018.
Based on seasonally adjusted monthly figures, projected at an annual rate.
Analysis of U.S. foreign trade usually focuses on goods and services exports minus goods and services imports.
Data source: Bureau of Economic Analysis (BEA)/Chart: ConstructConnect.

After consistently running sizable surpluses prior to the Great Recession, Canada has been underwater since late 2008. The current depth of the U.S. deficit isn’t quite as severe as occurred from 2006-2008, but it has shrunk by only 25% compared with its worst level. Also, over the latest year, it has flirted with deteriorating further once again.

Vibrant foreign trade promotes capital spending on physical assets in numerous ways. For countries with land linkages, it provides justification for highway, railway, bridge, and related border-crossing investments. In the energy sphere, there can be oil and gas pipeline and electric power transmission-line initiatives.

On the wider international stage, the drive to supply out of country customers warrants improvements and expansions at port facilities and airports.

But those are only the surface effects. There’s a far more compelling story to be told at the industry level. Whenever a nation expands exports and/or reduces imports, there are reasons to be more optimistic about domestic construction.

For Canada, historically, it’s mainly been heightened demand from other nations for raw materials that have lit a fire under resource sector projects, many of them mega-sized. Over the past 10 years, since the 2008-2009 recession, worldwide demand for commodities has failed to reach previous peaks, Canada’s trade numbers have suffered, and ultra-large projects in energy- and minerals-rich regions of the country have become less prevalent.

The U.S. is also home to agricultural and resource sectors that rise and fall with world trade. Manufacturing, however, is where foreign competitors have landed the harshest blows, causing much of the U.S. trade shortfall and limiting the incentive to build new plants. So far, neither the corporate tax cuts (from 35% to 21%) nor the new tariffs (on steel, aluminum, and other goods) have altered, by much, the courses of the foreign trade numbers or the new square-footage investment figures.

Fluctuations in imports play a role in construction spending through replacement demand. If there is a reduction in imports, all other things being equal, there will be a greater requirement for domestic production, increasing the likelihood of facilities additions.

The more direct and readily-apparent foreign trade impact on construction, though, comes from export sales. Canada’s year-to-date export figures offer some encouragement on that front. Graph 3 sets out the 19 product and province-of-origin combinations that are most important to Canada’s total exports picture.

In most instances in Graph 3, there have been solid year-over-year percentage increases. Some notable observations arising from the table are as follows:

As can be seen from the accompanying pie chart, China’s position as the primary source of the U.S. foreign trade deficit has not changed. On a monthly (annualized) basis, China’s share of the total usually lies in a range of 45% to 50%. In November 2018, at more than half, it was beyond its normal outer limit.

Other trading partners contributing to the U.S. deficit in November were the Euro Zone (18.7%), Mexico (9.1%) and Japan (7.9%). Canada, which appears among ‘rest of the world’, accounted for a less-than-1.0% share of the U.S. total foreign trade deficit.

As the text box next to the pie chart sets out, the two product categories that contribute the most to the U.S. trade difficulty – i.e., they’re the biggest causes of the problem, − are: motor vehicles and parts (approximately one-quarter of the total) and consumer goods (about one-half). Automakers in Germany, Japan, and South Korea make models that are popular with the American car-buying public. In consumer goods, and especially electronics, China and other Asian nations have made huge inroads into the U.S. marketplace, backed by assembly and distributor partnerships with the likes of Apple and Walmart.

There are plentiful media reports of slowdowns underway in the Chinese and European economies, with the new tariff regime introduced by the U.S. administration often cited as a contributing factor. Maybe December’s trade statistics will better establish that the tariffs are having a beneficial impact in America.

The intent of the first round of tariffs is to give Washington the leverage to negotiate an improved trading relationship with Beijing. Key discussion points include protecting intellectual property, establishing measures to reduce state-sponsored espionage and cyber-theft and allowing U.S. firms to gain greater access to Chinese consumer and financial markets.

High-level talks are underway, with every hope that a next even-steeper round of tariff increases, tentatively scheduled for March, won’t be deemed necessary.