As If Nothing Happened in Canada’s Labour Market in April

At least with respect to the big jobs picture, it’s as if nothing happened in Canada in April. 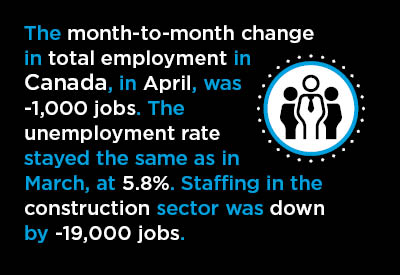 The month-to-month change in total employment was -1,000 jobs, according to Statistics Canada, and the unemployment rate stayed the same as in March, at 5.8%.

Delving deeper into the data, there were some interesting developments. While total employment and manufacturing employment hardly moved at all, positions with services-providing firms were up by +15,000 jobs, while staffing in the construction sector was down by -19,000 jobs.

Full-time employment pulled ahead by +29,000 jobs, but that gain was almost exactly offset by a retreat in part-time work, -30,000 jobs. The fact the advantage went to full-time hiring over part-time was a plus.

Canada’s ‘real’ (i.e., after adjustment for inflation) gross domestic product (GDP) growth in 2017 was a solid +3.0% year over year. And after month-to-month GDP faltered in January of this year (-0.1%), it became more robust again in February, at +0.4% month to month.

But the nation’s labour market, so far in 2018, is not showing the same degree of good health.

On the international front, the Trump Administration’s long deliberated and finally authorized decision to withdraw from the deal designed to curb Iran’s nuclear weapons ambitions has added both a conflict-risk premium and a sanctions-applied supply-shortage premium to the cost of oil. For the first time since 2014, crude now carries a sticker price near $80 USD per barrel.

Since Canada’s ‘loonie’ often receives a lift from rising energy prices, it has also been climbing, and is currently approaching 80 cents to the U.S. dollar.

The lackluster jobs numbers, and the shift upwards in the value of the loonie, will likely cause the Bank of Canada to remain on the sidelines into the Fall when it comes to considerations of further interest rate hikes north of the border.

Regionally, some of the provinces have reason to be pleased with their labour market statistics, especially when viewed relative to their results at the same time last year.

Also, notice that Alberta has out-performed its neighbor to the west, B.C. Of course, those two provinces are locked in a bitter dispute concerning whether a pipeline expansion (i.e., Kinder Morgan’s Trans Mountain route) will be allowed to proceed in order to transport Alberta crude to the Pacific Coast for export to customers in Asia.

Highlighting the importance of this debate was the latest monthly foreign trade report from Statistics Canada where the ‘lead’ was the painful news that in March, the land of maple leaves and Mounties recorded its largest merchandise trade deficit ever.

As a final observation, the regional labour market statistics will provide backdrops to two upcoming provincial elections – the one currently underway in Ontario and the other scheduled for the Fall in Quebec.