The change in total employment in Canada during October was +35,000 jobs, according to Statistics Canada. 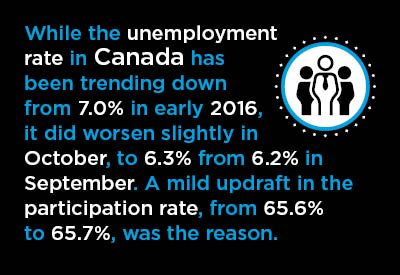 The number of full-time jobs expanded impressively in October (+89,000), but there was a significant offset from a retreat in part-time work (-54,000).

The year-over-year increase in full-time work is now nearly +300,000, whereas part-time positions have risen by only one-tenth that amount, +31,000.

Average monthly full-time employment in Canada in 2017 has been a strong +34,000 jobs. Full-time work, since it is usually more stable and higher paying, is viewed more favorably by analysts – i.e., for the contribution it will make to gross domestic product (GDP) growth − than part-time endeavors.

The construction sector recorded a nice jump in employment in the latest month, +18,000, and manufacturing made a bit of splash in the hiring pool as well, +8,000.

Just the same, the total number of manufacturing jobs in Canada is now no higher than it was in early 2009. There has been a little up-and-down movement since then, but not much.

The number of construction jobs in Canada has been almost flat since 2013. There has been a gradual incline, but it has been barely perceptible.

In 2000, there were three jobs in Canadian manufacturing for every one job in construction. Over the past 17 years, the ratio has changed dramatically to where there are now only 1.2 jobs in manufacturing to each ‘hard hat’ job.

Regionally, it used to be the case that Western Canada had a considerably stronger labour market than in the East. The development of resource sites in energy and mining, especially, was a key driver of jobs growth in Alberta and Saskatchewan.

With commodities struggling to make pricing headway over the past couple of years, greater workplace parity has returned. Taking the Ontario-Manitoba boundary as the dividing line, East and West have experienced quite similar year-over-year jobs growth of +1.7% and +1.6% respectively.

Within the East, however, Ontario plus Quebec, at +1.9% year-over-year jobs growth, has done much better than the Atlantic Region, -0.1%.

As for the nominal +300,000 increase in jobs year over year, nearly half of that total gain has originated in Ontario, with Quebec and B.C. accounting for about 20% each.

Just how well B.C. has been performing on the jobs front can be discerned from population shares. Ontario’s share of the country’s total population is 39%, while Quebec’s is 23%. The residents of B.C. comprise only 13%.

The West is still beating the East with respect to unemployment rates. The lowest provincial unemployment rates currently are in B.C. (4.9%), Manitoba (5.2%) and Saskatchewan (5.9%) in the West, with Ontario (also 5.9%) and Quebec (6.1%) being the standard bearers in the East.

Barrie and Hamilton may be turning in such outstanding results for a reason that needs some explanation. The Labour Force Survey solicits responses from households. Those households are in specific locations, but the jobs held by wage-earners in those households may be situated somewhere else entirely.

Barrie, to a significant degree, and Hamilton, to a much lesser degree, are bedroom communities for Toronto. Some of the jobs growth in Barrie and Hamilton is coming from workers who are willing to commute from further afield to escape Toronto’s exorbitant house prices.

The highest unemployment rate is in St. John’s, Newfoundland (8.8%). But it’s also worth noting that even though Alberta’s economy is on the mend, thanks to the international price of oil moving up from less than $30 USD per barrel to over $50, Edmonton (8.2%) and Calgary (8.3%) are still dealing with jobless rates well above what they were previously accustomed to seeing as normal.

Based on average of latest three months, unadjusted data.
When the ranking numbers are the same, the cities are in a tie.
Data source: Statistics Canada (Cansim 282-0135).
Tables: ConstructConnect.