The Federal Reserve has fallen into good fortune with the latest Employment Situation Report from the Bureau of Labor Statistics (BLS). 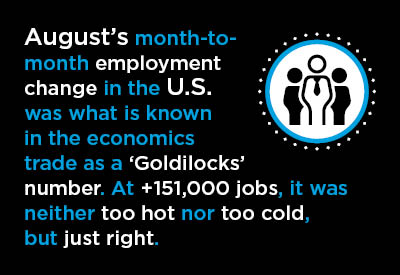 August’s month-to-month employment change was what is known in the economics trade as a ‘Goldilocks’ number. At +151,000 jobs, it was neither too hot nor too cold, but just right.

It was ‘just right’ in the sense that it indicates the economy is continuing to generate acceptable jobs growth, but not to such an overheated degree that the Fed must feel compelled to implement a further interest rate hike. (For the first time in many years, the Fed initially pulled the trigger on rates in December of last year).

As an independent body, the Fed may take action on yields anyway at its Open Market Committee (FOMC) meeting later this September. Doing so, however, would land it squarely in the crosshairs of political debate with only two months remaining before the presidential election.

It would be perfectly understandable if the decision-makers on the Fed’s Board wished to avoid the aggravation.

August’s lukewarm labor market report, plus the recent tepid Purchasing Managers' Index (PMI) reading of only 49.4% from the Institute for Supply Management (ISM), provide convenient excuses for the Fed to sit on its hands. (When the PMI number is less than 50.0%, manufacturing activity is declining. Prior to August’s disappointing result, the PMI had been above 50.0% for five months in a row.)

It now seems most likely that any decision to raise the federal funds rate will be delayed until at least December.

The industrial sub-sector jumps in employment in August were more evenly balanced than usual.

The disparity between the front-runner, i.e., ‘education and health services’ (+39,000 jobs month over month) and a pack of others chasing it, was small.

Almost all of the jobs gain in ‘education and health services’ occurred in ‘health care and social assistance’ (+36,000), with the former (+14,000) taking back seat to the latter (+22,000). It may not be auspicious that jobs helping out with social assistance are becoming more plentiful.

On the other hand, it is pleasant to report that hospital employment (+11,000) within ‘health care’ continued on a roll. The graphed curve of jobs at hospitals has been on a sharply ascending incline of late.

In second place for month-over-month nominal jobs growth in August, but not by much, was ‘leisure and hospitality’ (+29,000). All of that increase was provided by ‘food services and drinking places’.

Government hiring in August was up by an impressive +25,000 jobs. It was local government (+24,000) that took on almost all of the additional staffing as the states stood pat and Washington’s payroll rose minimally (+1,000).

‘Professional and business services’ employment rose by +22,000 jobs, but there were no particular standouts among the various disaggregated categories.

‘Retail trade’, ‘transportation and warehousing’ and ‘financial activities’ were locked in a tie at +15,000 jobs each. For those with a particular interest in construction activity, it’s interesting to note that the number of retail employees working for ‘building material and garden supply stores’ climbed by a nicely upbeat +8,000.

Further on the subject of construction, August’s employment news was disappointing, -6,000 jobs. It was nonresidential building (-8,000) and heavy/civil (-6,000) contractors that shed workers as opposed to home builders (+5,000).

The jobless rate in the construction sector stayed tight. It was at a level, 5.1%, that continued to be an improvement over the year before. In August 2015, the figure had been one percentage point more elevated, at 6.1%.

Manufacturing employment in August was similarly in the doldrums. The number of production-line workers shrank by 14,000.

Everyone is waiting for the ongoing employment growth in America’s economy to also lead to greatly improved compensation. Traditional economic theory postulates that better wages guarantee the increases in consumer spending needed to move the overall economy onto a sustainably loftier plane of GDP growth.

According to the latest (i.e., August) numbers from the BLS, however, average hourly and weekly earnings, are still uninspiring.

For all employees on nonfarm payrolls, the year-over-year increase in average hourly earnings in August was +2.4%, and in average weekly earnings, +1.5%. For the total industry sub-sector of construction, the gains were a little better, at +2.8% hourly and +1.7% weekly.

Focusing only on production workers and leaving out supervisory personnel, the year-over-year increases economy-wide were +2.5% for hourly earnings and +2.2% for weekly earnings. The comparable numbers for on-site construction workers were +3.4% and +2.6% respectively.

It should be noted, however, that the foregoing percentage changes may be understating the true extent of labor cost increases at this time.

The latest (i.e., Q2 2016) Productivity and Costs report from the BLS records a quarter-to-quarter annualized change in U.S. labor force hourly compensation of +3.7%.

Finally, with respect to year-over-year U.S. employment percentage changes, the August figures from the BLS were as follows: grand total, +1.7%; services total, +2.2%; manufacturing, -0.3%; and construction, +3.1%.

Clearly, the private services providing portion of the economy is providing the piston power to propel U.S. employment and GDP growth at this time.