Ramifications of U.S. Shutdown Ripple Outwards to China and Canada

The following was written in the immediate hours before the surprising passage of a bipartisan-supported bill in the Senate to temporarily reopen the government. There will be a three-week grace period during which employees will be compensated and efforts will be made to reach an agreement on how to properly secure America’s southern border. 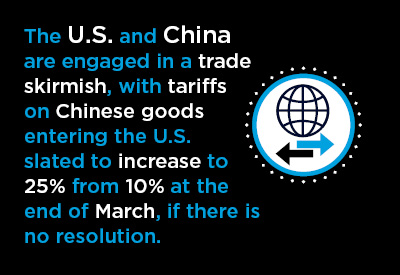 If there is failure to reach a compromise solution in the allotted time, then there are two readily apparent possibilities: (1) the President will declare a state of emergency to secure funding for construction of a Wall; or (2) there will be another partial cessation of government activities and compensation. Should the latter occur, then what is written below will once again apply.

U.S. Census Bureau workers are off the job due to Washington’s partial funding shutdown. As a result, current statistics on housing starts, retail purchases and foreign trade are not available.

This is no minor matter. It will be difficult to accurately calculate national output – i.e., the important gross domestic product (GDP) measure – without reliable data on many of its key components. GDP growth, or lack thereof, is one key determinant of Federal Reserve interest rate moves. The Fed will struggle over whether to be hawkish, dovish, or stick with neutral.

Furthermore, the ramifications of economic data omissions are not solely limited to the U.S.

The U.S. and China are engaged in a trade skirmish, with tariffs on Chinese goods entering the U.S. slated to increase to 25% from 10% at the end of March, if there is no resolution. The U.S. has been running a huge trade deficit with China for years. In many months, it has been in a range of 40% to 50% of the total U.S. merchandise trade shortfall with all nations.

Soon, it will not be possible to know exactly where the U.S. stands with respect to its trade position with Beijing. In October, the last month for which official U.S. figures are available, China’s share of the U.S. trade deficit in goods was 48%.

China has a strong vested interest in waylaying a further hike in U.S. tariffs. Chinese authorities are claiming their economy is still growing at a 6% to 7% annual rate. Given recent weakness in Chinese auto sales and housing starts, few independent analysts believe them. Smoothing trade relations with the U.S. would be highly desirable, but productive negotiations are usually tied to having the best background information.

As for Canada’s interaction with the U.S., statisticians from both countries work together to calculate trade flows. Statistics Canada has published November trade numbers but has warned followers that December results will be delayed due to the data interruption south of the border.

For Canada, the GDP measurement issue may be even more severe than for the U.S. Exports as a share of Canadian GDP are about one-third; and three-quarters of those foreign sales are shipped to the U.S. The math (0.33 x 0.75 = 0.25) says that 25% or one-quarter of Canada’s GDP is dependent on trade with the U.S. A failure to have reliably accurate trade statistics for Canada will throw into doubt the veracity of the country’s next GDP summation.

With Canada’s trade statistics about to turn murky, it seems advisable to look at November’s figures in some detail, while they are still fresh.

From Table 1, Canada’s total exports through November of last year were +7.8% compared with January-to-November 2017. The province of Newfoundland and Labrador had the greatest year-to-date increase in export sales, +30.0%. Alberta was runner-up, at +17.6%.

Both provinces benefitted from big jumps in their energy product exports: +45.7% for Newfoundland and Labrador and +20.1% for Alberta. (Table 2 highlights the products in six provinces which figure most prominently in Canada’s total exports picture.)

From the first two columns of Table 1, it’s apparent that Alberta is the standout among the provinces and territories for export sales relative to population size. With just 11.6% of the nation’s resident count, Alberta manages to account for more than one-fifth (21.9%) of all Canadian export sales.

The buoyant export numbers appearing in Tables 1 and 2 may lead one to misleadingly conclude that Canada is comfortable in its foreign trade position. Unfortunately, imports exceeding exports in other major product areas – i.e., ‘consumer goods’ (most recently -$50.0 billion year-to-date in 2018), ‘electronic and electrical equipment’ (-$38.4 billion), ‘industrial machinery and equipment’ (-$26.2 billion) and ‘motor vehicles and parts’ (-$21.2 billion) − have meant that a net merchandise trade deficit has prevailed in Canada in almost every month since the 2008-2009 recession.

The last data point is for November 2018.
Based on seasonally adjusted monthly figures, projected at an annual rate.
Analysis of Canada's foreign trade position usually focuses on the Merchandise Trade Balance which is goods exports minus goods imports.
Data source: Statistics Canada/Chart: ConstructConnect.