Rankings of States and Provinces by Roadwork Construction Starts

The table and maps accompanying this article feature comparisons of highway, street and roadwork construction starts in all the states, plus District of Columbia, in two ways: (1) by dollar-volume level, taking the annual average over the past two years (2017 and 2018); and (2) per capita (i.e., the dollar volume in (1) divided by each individual state’s population). 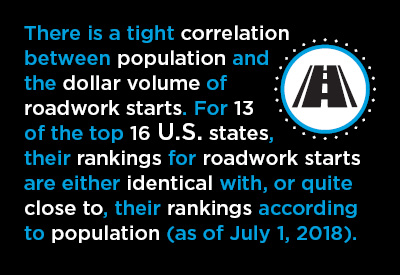 In some states, there can be considerable variation in the dollar volume of roadwork starts from one year to the next. Therefore, it seems only fair to smooth the series out a bit, and hence the reason for utilizing a latest-two-years average.

On the left-hand side of Table 1, there is a ranking of all states and D.C. according to their level of roadwork construction starts. Sixteen states have exceeded an annual average of $1.0 billion over the past two years and they are highlighted in Map 1. Washington state, at $995 million, and New Jersey, at $980 million, just missed the cut.

Table 1: U.S. Roadwork Construction Starts
* Per capita measure = dollar volume divided by population in each state.
When the ranking numbers are the same, the states are tied.
Data source: ConstructConnect and Census Bureau.
Table: ConstructConnect.

There is a tight correlation between population and the dollar volume of roadwork starts. For 13 of the 16 states shown in the map, their rankings for roadwork starts are either identical with, or quite close to, their rankings according to population (calculated as of July 1, 2018). For example, Texas is number 1 for starts and number 2 for population; California is 2 for starts and 1 for population; Florida is 3 and 3; New York, 4 and 4; Pennsylvania, 5 and 5; Illinois, 6 and 6; Ohio, 7 and 7; and so on.

The right-hand side of Table 1, which provides a ranking of states and D.C. according to per capita value of roadwork starts, takes the analysis down a different pathway. The four states at the summit of the per-capita ranking – North Dakota, Alaska, South Dakota, and Wyoming – all have quite low resident counts. Their populations range from a high of 880,000 for South Dakota to a low of 580,000 for Wyoming.

Minnesota is the first somewhat-large-population state (5.6 million people) to appear near the top in the per-capita ranking, in spot number 5.

Not only population level, but rate of population change seems to have a bearing on the per-capita value of roadwork construction starts. For example, among the four largest-population states, Texas and California are seeing their resident counts increase faster, +1.3% and +1.5% annually, than California and New York, +0.4% and -0.2% annually.

More population and a rising demand for housing, often in the suburbs, will drive greater infrastructure needs. Nevertheless, tying roadwork starts to population growth is not an exact fit.

What is helpful, though, is to distinguish between youthful ‘upstarts’ and older established regions. Other already built-up states in addition to New York appearing near the bottom in the roadwork starts ranking are Michigan, New Jersey, Massachusetts and Connecticut.

Of course, there can be other reasons for roadwork construction to be prioritized in a specific state. A severe weather event, causing washouts, may necessitate damage repair. Or there may be instances when such construction is stimulated by a strong rural-to-urban shift.

Alternatively, in some less populated areas, large dollar spending may be required to gain access, for equipment and labor, to remote resource sites.

In today’s highly competitive world, economies everywhere are striving to deliver goods and people faster and cheaper. New and well-maintained highways and roads are a key means to achieve productivity enhancements on the logistics grid.

In Canada, Ontario has been the leader among the provinces for latest two-year average roadwork starts, at $2.5 billion CAD. Quebec ($2.4 billion) fell short of first place by only the smallest of margins. Also, it’s worth noting that the Atlantic Region recorded a surprisingly upbeat $1.6 billion on average in 2017-2018.

As a final observation, there’s another standout number to showcase. The total Canada per capita figure was $231. Applying a 0.75 currency conversion rate, $231 CAD becomes $174 USD – which is almost exactly the same as the total U.S. per capita number of $178 USD.