Series (1 of 7): Rankings of States by Industrial Subsector Jobs – Manufacturing 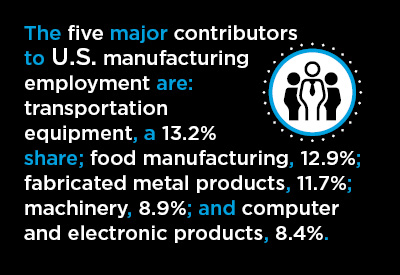 (1) The four most populous states all appear among the Top Dozen for nominal levels of manufacturing jobs. But also notice that seven states, mainly in the Midwest, lie between Texas and New York in the ‘weight’ ranking. Ohio, Michigan, Illinois, Pennsylvania, Indiana, and Wisconsin have long been stalwarts of American industry.

(2) Among the Midwest heavy hitters in manufacturing, the state which ranks number one for ‘concentration’ of jobs in the sector is Wisconsin (paper and processed dairy products). Indiana (transportation equipment) comes next.

(4) Michigan (with an 11.4% share) leads all states in number of transportation equipment jobs. It’s followed by Indiana (8.2%). California and Ohio (each with 7.3% shares) are tied for third.

(5) By a wide margin, California is out front among states in number of food manufacturing jobs.

(6) California and Texas provide the most ‘fabricated metal product’ jobs; Ohio is in third spot.

(7) Texas, which is big in oil and gas drilling equipment, is the nation’s leader in machinery manufacturing jobs.

(8) More than a quarter of U.S. ‘computer and electronic products’ manufacturing jobs are in California. Second-place Texas has only about one-third of California’s contingent.

Total U.S. number of manufacturing jobs per million population is 38.7.