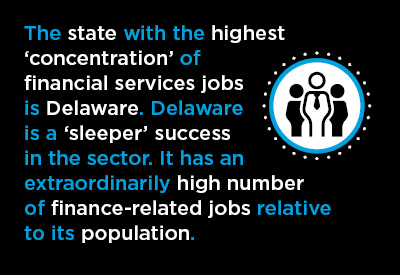 It’s important to know that three clear groupings of states emerge from an analysis of the Census Bureau’s latest (i.e., through July 1, 2018) population statistics. Those groupings are: (A) the four frontrunner states by nominal levels of population – California, Texas, Florida and New York; (B) the three states with the fastest year-over-year gains in population – Nevada, Idaho and Utah; and (C) another tier of six states with both strong nominal increases and percentage changes in  resident counts over the past several years – Washington, North Carolina, Georgia, Arizona, Colorado and South Carolina. (See, "Latest State Population Statistics, Maps, & Tables – Six Dark Horse Winners.")

(1) The tier (A) biggest-population states occupy positions one through four in the table showing  ‘weightings’ of financial services jobs. New York City is one of the world’s premier financial capitals and, therefore, it’s a bit of a surprise that N.Y. state appears below California and Texas. But be aware that the Bureau of Labor Statistics (BLS)’s definition of financial services includes much more than investment houses and stock brokerages. The sector also encompasses commodities trading (Illinois), commercial banking, insurance companies and real estate firms.

(2) A couple of tier (C) states, Georgia and North Carolina (e.g., Bank of America and Wells Fargo in Charlotte), make respectable appearances (positions 9 and 10 respectively) in the left-hand ranking-by-weight (or nominal-level-of-jobs) table.

(3) With respect to ‘concentration’ of financial services jobs (i.e., per million of population), New York is the only one of the tier (A) states making it into the Top Dozen.

(4) The state with the highest ‘concentration’ of financial services jobs is Delaware. Delaware is a ‘sleeper’ success in the sector. It has an extraordinarily high number of finance-related jobs relative to its population. More than half of publicly-traded companies in the U.S. and more than 60% of Fortune 500 companies are incorporated in Delaware, to benefit from a more-relaxed and business-friendly regulatory environment.

(5) Nebraska, also with a high ranking for ‘concentration’, is known for insurance (Mutual of Omaha) and Warren Buffet’s Berkshire Hathaway conglomerate.