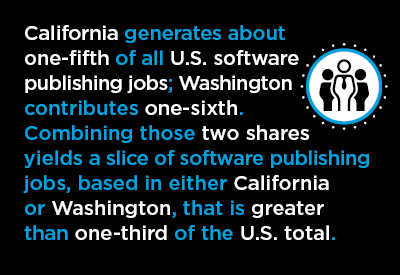 It’s important to know that three clear groupings of states emerge from an analysis of the Census Bureau’s latest (i.e., through July 1, 2018) population statistics. Those groupings are: (A) the four frontrunner states by nominal levels of population – California, Texas, Florida and New York; (B) the three states with the fastest year-over-year gains in population – Nevada, Idaho and Utah; and (C) another tier of six states with both strong nominal increases and percentage changes in  resident counts over the past several years – Washington, North Carolina, Georgia, Arizona, Colorado and South Carolina. (See, "Latest State Population Statistics, Maps, & Tables – Six Dark Horse Winners.")

(2) The four Tier A largest-population states dominate the ‘weight’, or nominal-number-of-jobs, ranking. California, New York, Texas and Florida, which together account for one-third of the country’s population, play an even bigger role in America’s total ‘information services’ jobs market. Their combined share is slightly more than 40% (i.e., two out of every five such jobs).

(4) Thanks to a major-league presence of ‘motion picture and sound recording’ studios, nearly one in five total U.S. ‘information services’ jobs is located in California.

(5) First-place-ranked District of Columbia has an extremely high ‘concentration’ (i.e., employment in the subsector per million population) of information services jobs. As the epicenter of political power in the country, D.C. is home to a prodigious and vigorous media presence.

(8) Massachusetts also figures prominently in software publishing, providing a share of America’s total that is just under 10%.