Series (4 of 7): Rankings of States by Industrial Subsector Jobs – Leisure and Hospitality 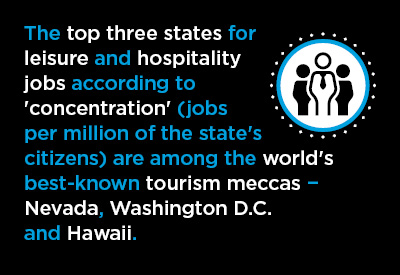 Good health in the leisure and hospitality sector provides the backing for new hotel and motel work. And jobs levels in information and financial services, as well as in more rapidly expanding fields of endeavor such as computer systems and design services, establish the need for additional office space and commercial tower square footage. (See, "Shifts in Office Jobs and Implications for Commercial Tower Construction".)

By ‘weight,’ the states with the largest populations are almost always high in the rankings. The rankings by ‘concentration,’ however, often deliver a jolt of surprise or two.

(1) The four largest-population states are also ranked numbers one through four for 'weight', or nominal level, of 'leisure and hospitality' jobs. Furthermore, the ordering is the same as for population. California (population 39.6 million) is number one for 'weight' and is followed by Texas (population 28.7 million), Florida (population 21.3 million), and New York (population 19.5 million).

(3) Two Tier B states (i.e., ones with rapid percentage changes in population) rank highly for ‘concentration’. Nevada, with Las Vegas in its pocket, tops the chart and Colorado is in sixth position. Nevada may no longer have a stranglehold on gambling in the country, with casinos springing up seemingly everywhere, but it is still the go-to place for an unlimited variety of excitement.

(3) The top three states according to 'concentration' (jobs per million of the state's citizens) are among the world's best-known tourism meccas − Nevada, Washington D.C., and Hawaii. Plus, sunny Florida, with its amusement theme parks in Orlando and cruise ship terminals in Miami and Fort Lauderdale, is in eighth spot.

(5) Ranked number 12 for 'concentration' is South Dakota, famous for Mount Rushmore located in the Black Hills region of the southwest corner of the state.

Map 2: Top 12 – Rankings of States by Industrial Subsector Jobs – “Concentration”
Leisure and Hospitality Jobs Per Million Residents of the State

Total U.S. number of leisure and hospitality jobs per million population is 49.9.

Tables: Ranking of States by Leisure and Hospitality Jobs

Total U.S. number of leisure and hospitality jobs per million population is 49.9.