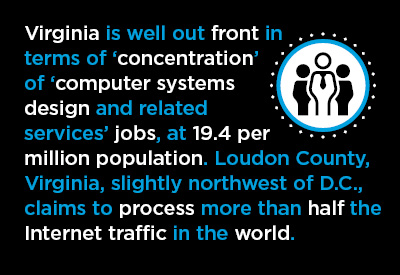 By ‘weight,’ the states with the largest populations are almost always high in the rankings. The rankings by ‘concentration,’ however, often deliver a jolt of surprise or two.

(1) ‘Computer systems design and related services’ jobs fall within the ‘professional and business services’ designation adopted by the Bureau of Labor Statistics (BLS). Acquiring the expertise needed to carry out such work warrants being called a ‘professional.’ Furthermore, such employment is usually rewarded with a level of compensation above the ordinary.

(2) There are three subcategories within ‘computer systems design and related services’ – (i) ‘custom computer programming services;’ (ii) ‘computer systems design services’ and (iii) ‘computer facilities management services.’ Payrolls in all three have been expanding rapidly, but it’s in (iii) where they have been especially taking flight. Companies have been increasingly moving their big data to what are essentially server farms. Such facilities have come to be known as the cloud. And it’s in the cloud where Virginia shines.

(3) The internet sprang forth from efforts to facilitate the sharing of information by the Defense Department’s Advanced Research Projects Agency (DARPA), based in Pentagon City, Virginia. Hence, the state of Virginia had an early step up on the web. Seizing the moment, legislators began offering tax incentives to private-sector firms to locate digital operations in the state. Loudon County, Virginia, slightly northwest of D.C., claims to process more than half the internet traffic in the world.

(4) The city of Ashburn in Loudon County, Virginia, is data center central. One concern that local residents tend to dwell on is the need for costly accompanying infrastructure. For powering up and keeping temperatures cool, data centers require enormous amounts of electricity.

(5) With respect to the ‘weight’ (i.e., nominal level) of jobs in ‘computer systems and design services,’ Virginia has inserted itself between the four largest-population states. While its share (7.9%) of the U.S. total is well below California’s (15.3%), it’s not far behind the portion held by Texas (8.4%); and Virginia solidly beats New York (5.3%) and Florida (4.6%).

(6) Virginia is well out front in terms of ‘concentration’ of ‘computer systems design and related services’ jobs, however, at 19.4 per million population. Massachusetts (12.4) and Maryland (12.2), in second and third places, trail by more than one-third. Maryland benefits from being in the same neighborhood as Virginia and D.C. Massachusetts sows ‘computer systems and design services jobs’ as a natural by-product of being home to several of America’s elite universities.

(7) Six of the 12 states that rank highly in ‘weight’ also appear among the top 12 for ‘concentration’ – California, Virginia, Massachusetts, Maryland, New Jersey, and Georgia. From the ‘weight’ side of the table, California lays claim to nearly one in six of all ‘computer systems design and related services’ jobs in the U.S.

(8) One Tier B state (Utah) and three Tier C states (Colorado, Washington, and Georgia) appear among the top 12 for ‘concentration.’ Once again, this suggests a close correlation between desirable jobs, healthy population statistics and, ultimately, construction opportunities.