Shifts in Office Jobs and Implications for Commercial Tower Construction 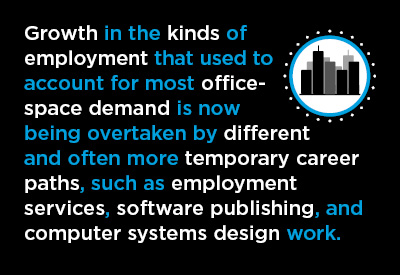 There are disruptors throughout the economy and the office space market is no exception.

Growth in the kinds of employment that used to account for most office-space demand is now being overtaken by different and often more temporary career paths.

The record of jobs creation in 12 industry sub-sectors is explored in Graphs 1 to 3 and in Table 1.

The dozen sub-sectors that have been chosen for study are the ones most clearly accounting for private sector office-space usage in the Bureau of Labor Statistics (BLS)’s monthly Employment Situation report.

The monthly jobs levels in each sub-sector have been converted to indices, with July 2009 chosen as the base (i.e., set equal to 100.0). July 2009 marked the end of the recession and the beginning of the positive turnaround that has prevailed up to the present.

Featured in Graphs 1 and 2 are eight type-of-employment categories where the increases in the number of jobs since the recession have still not risen above +20%.

In Graph 1, the gains from such long-established providers of employment as advertising, architectural/engineering, accounting/bookkeeping and legal services firms have been muted

The recent record of hiring by legal services firms has been especially anemic.

A similar pattern of weak payroll increases by companies engaged in real estate, securities and commodities trading, insurance protection and traditional banking is apparent in Graph 2.

Job openings with traditional/commercial banks have been particularly slow to materialize.

Graph 3 tells an entirely different story. All four sub-sectors – employment services, software publishing, computer systems design work and delivery of management services – have achieved jobs growth of between +50% and +60% over the past nine-and-a-half years.

All four of the sub-sectors in Graph 3 are key participants in the extraordinary changes that are underway in the economy at large.

The explosion of work in software publishing and computer systems design clearly reflects the boom in the high-tech sector that has taken the NASDAQ stock index to such heights, even after its retreat of late.

The surge in ‘employment services’ work reflects a desire by both employers and employees to be more open in their working arrangements. Many members of a younger generation have been comfortable working ‘gigs’ that allow them to move around and to try out alternative lifestyles. Employers have been increasingly quick to turn to employment services to fulfill their manpower needs.

Table 1 takes the same data behind Graphs 1 to 3, but slightly alters the form. The percentage changes, July 1, 2009 to July 1, 2018 aren’t quite as dramatic because the jobs in each sector are expressed per capita. (To say ‘per capita’ is not perfectly accurate. To eliminate decimal points and make the numbers easier to read, jobs levels in Table 1 have been calculated per 100,000 population.)

An advantage of Table 1 is that it shows relative sizes of employment pools. The rankings in the first column are based on July 1, 2018 levels. ‘Employment services’, with 1,139 jobs per 100,000 population is at the top of the listing. (In the summer of 2009, ‘traditional banking’ was number one, with employment services and insurance carriers nearly tied for second.)

Table 1: Office Occupancy Jobs
Number of Jobs in the Sector per 100,000 Population