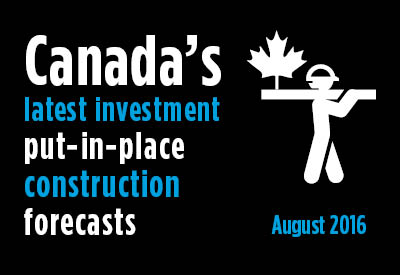 By 2019, grand total ‘constant’ dollar spending on construction in Canada still won’t be as high as in 2014.

Apologies are extended for including the next several paragraphs which are long on technical detail. This diversion from the main message about the forecasts is viewed as essential because many readers will be curious about the sources of the historical data.

Let’s provide some context. U.S. put-in-place construction statistics, according to a variety of structure types, are available from the Census Bureau in a neat little package at the beginning of each month. To say the least, it’s not quite the same cheery situation in Canada.

Instead, for Canada, one must consult several Statistics Canada ‘Cansim’ tables that are published according to a variety of time frames (i.e., some monthly, some quarterly and some annual). (Cansim is Statscan’s downloadable-over-the-Internet and freely-available database.)

The entire complicated methodology by which the Canadian statistics are derived won’t be set out here. What is offered in the following, though, is an abbreviated and simplified version.

For the historical values (and 2016 estimates) of residential construction work, the primary source is Cansim Table 026-0013.

For nonresidential building categories, the source is Cansim Table 026-0016.

Crucial to the calculation of 2016 construction put-in-place ‘estimates’ are the findings from the Capital and Repair Expenditures (CARE) survey, which summarizes the responses from 25,000 private and public sector owners and decision-makers as to their spending intentions.

While being far more difficult to access, the Canadian data has one advantage over the U.S. comparable information. The Canadian numbers include current regional breakdowns.

The price indices to convert between ‘current’ and ‘constant’ dollars have been calculated based on information in Cansim Tables 026-0017 (residential) and 026-0016 (nonresidential), with consideration also given to gross domestic product (GDP) price deflators as can be extracted from Cansim Table 380-0064.

In any event, the big scary news is that more than $20 billion CAD has been cut from the ‘grand total’ Canadian construction scene over the past two years, 2016 versus 2014. The chunk removed from engineering/civil construction work has been a staggering -$30 billion.

According to ConstructConnect’s latest forecasts, Canada’s total put-in-place construction spending, after declining during the past two years, will move gradually upwards again from 2017 through 2019. By 2019, it will reach $316 billion, which will be a new all-time high.

It’s hard to see the joy in the outlook, however, when the estimate for 2016 construction activity sits $23 billion CAD below its 2014 level. Since residential work has been +$8 billion over the past two years, and nonresidential building work has been almost flat, -$1 billion, it must be engineering/civil work that has surrendered in calamitous fashion.

The numbers verify that conclusion. The ‘current’ (i.e., no adjusted for inflation) dollar volume of engineering construction in Canada has fallen from $138 billion in 2014 to $108 billion in 2016. That’s a staggering decline of -$30 billion. In percentage terms, it’s -22%.

This is seriously negative news for the economy as a whole. At a time when construction is struggling, manufacturing is being counted on – especially with the help of the lower-valued Canadian dollar – to pick up some of the job-creation slack. But that’s not happening. According to August’s Labour Survey report from Statistics Canada, year-over-year manufacturing employment nationwide is currently -1.0%. (Construction’s comparable figure is +1.1%.)

While it’s nice that Ottawa is planning to double the availability of funding for infrastructure projects, the proposed work won’t nearly compensate for the retraction in the total construction market that is underway. There’s a whole array of issues that need turning around before construction can regain its role as one of the primary drivers of the overall economy.

A primary cause of the ‘grand total’ construction spending downturn has been the reversal in the commodities-price super-cycle from the high demand and record-level era of the mid-00s to the hesitant need and deeply depressed raw materials world of today.

This is most apparent in the energy sector. Weak world trade, new shale-rock sources of supply in the U.S. and a conscious decision on the part of Saudi Arabia to pump out oil as fast as it can have caused the global price of crude to plummet from over $100 USD per barrel to a low of $30.

Wherever and whenever possible, Canada’s Oil Sands producers have scaled back or eliminated their expansion plans in order to prop up profits or contain losses through expenditure reductions.

To understand the degree of distress being experienced by firms in Alberta, consider that the province in 2014 was home to $62 billion worth of put-in-place engineering construction activity. In 2016, Alberta will host only $37 billion of such work, a slide of -$25 billion (-41%).

Nor have the downbeat capital spending effects from distressed commodities prices been limited to the energy sector. Iron ore projects are being delayed on account of a huge buildup in excess steel-making capacity in China, which is also being felt around the world. The prices of inputs into the steel-making process, and especially iron ore, have been feeling the ‘cold shoulder’.

Potash prices have slipped dramatically from their former highs, causing firms in the sector to close some mines (New Brunswick) and delay expansion plans (Saskatchewan).

Attempts to resolve the problems will often show up in interesting and unexpected ways. For example, Potash Corp. and Agrium in Canada are studying whether or not it would be in their best interests to merge.

In the fossil fuels market, Calgary-based Enbridge is embarking on a friendly takeover of Houston-based Spectra that would give the combined company the largest holding of oil and natural gas pipeline assets in the world.

In 2013, when CanaData compiled a list of all the projects underway or planned across the nation valued at $1 billion or more each, there were approximately 100 such undertakings. This summer, when CanaData carried out the same exercise once again, there were only 60 such projects in the listing. Surely it can’t be the case that waiting for an improvement in world trade that will lift commodity prices is the only hope for an improvement in construction prospects.

There have to be other options. It’s certainly not helpful that major pipeline projects, which would make it possible for land-locked Canadian oil to be shipped to new customers in Asia, Europe, Africa and elsewhere are being frozen in the approvals process. The Energy East project, which would convert an existing pipeline from natural gas to oil over much of its length, with new construction required only in eastern Ontario, Quebec and N.B., has been brought to a standstill by aggressively disruptive protesters at National Energy Board hearings in Montreal.

Ottawa must play a leadership role in finding the productive and responsible means to power through such obstacles. Our leaders must embrace the challenge to merge wisdom and sensitivity in such a manner as to establish a balance between environmental concerns, native land claim issues and the desire by all Canadians, fully recognized or not, to preserve their enviable standards of living.

Let’s now set aside the foregoing gloom and reflect on how there are pockets of significant upcoming construction activity to look forward to as potential sources of excitement.

A kick start for engineering projects will be delivered by infrastructure spending to encourage rapid transit projects in many major urban centers in Canada. And massive electricity-generating projects are underway or planned in at least four provinces: the finalization of Muskrat Falls in Labrador; refurbishment of Darlington nuclear power in Ontario; the Keeyask station in Manitoba; and work at Site C on the Peace River in B.C.

Ontario and Quebec have two enormous (i.e., valued at more than a billion dollars each) bridge projects underway – the Champlain crossing in Montreal and the strikingly-named Gordie Howe bridge that will connect Windsor and Detroit. And on the East Coast and along the West Coast, and in places in-between, there are plans for giant LNG projects, a number of which will also require pipeline delivery systems from shale gas deposits.

Finally, residential construction has maintained a remarkably steady upward course over the past many years. Affordability is becoming more of an issue, however, and authorities in some locales have been looking into, or have already introduced, measures to curb demand. Therefore, ‘current’ dollar residential construction in Canada as a whole is expected to flatten over the next two years before experiencing a slight upward turn again from 2016 to 2017.

To wrap up, let’s look at some summary measures of construction in Canada beginning with ‘current’-dollar capital investment spending on ‘grand total’, ‘residential’, ‘nonresidential building’ and ‘engineering’ work. The first three will establish new record highs by 2019. Some of that success will be hollow, however, as it will depend on a steady upward creep in the cost of construction. The ‘current’-dollar volume of ’engineering’ construction by 2019 will still fall a little below the outstanding level it achieved in 2014.

In ‘constant’-dollar terms, only ‘residential’ and ‘nonresidential building’ work will return to their previous peaks (and only barely) by 2019. ‘Grand total’ construction in 2019 will still fall short of its previous summit (achieved in 2014) on account of ‘engineering’ being in recovery, but having completed only about half the return journey to lift it from floor to previous ceiling.