One would think it would be relatively easy to find put-in-place dollar volume figures for Canadian and provincial construction activity by major types of structure. Sad to say, that’s not the case. 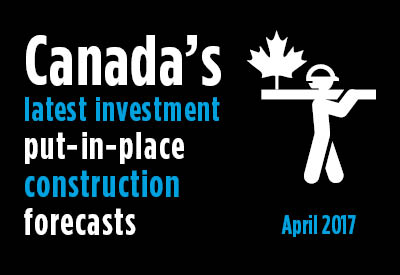 Not to worry, though. Appearing in 14 tables in this article are actuals, estimates and forecasts for residential, commercial, industrial, institutional, engineering and grand total construction in Canada – and in all the provinces and regions − 2010 to 2020.

Tables 1 to 14 show the results for each type of structure in two ways: in ‘current’ dollars and in ‘constant’ (i.e., adjusted for inflation) dollars.

The following is an explanation of how the data has been derived.

The ‘actual’ residential figures to 2016 are the summation of the quarterly numbers from Cansim Table 026-0013. (Cansim is Statistics Canada’s easily accessible and freely downloadable on-line database.) The numbers for 2017 and beyond have been guided by housing starts forecasts, expectations about renovation spending and conclusions reached from fitting an econometric trend line through the history of the numbers.

Annual ‘actuals’ through 2016 for the non-residential building categories (i.e., commercial, industrial and institutional) are the sums of the quarterly not-seasonally-adjusted (NSA) numbers in Cansim Table 026-0016. The estimates for 2017 have been largely determined by what relevant owners are saying about their investment spending intentions as recorded in the Non-residential Capital and Repair (CARE) Expenditures survey, released February 28, 2017.

For example, in assessing 2017’s industrial construction outlook, much weight has been given to the year-over-year capital spending planned by manufacturers in each province or region.

Institutional construction spending in 2017 will be mainly a function of work undertaken by owners in ‘education’ and ‘health care’.

The 2018 and beyond forecasts for the non-residential building categories utilize fitted trend lines as well, while also applying judgement factors to a broad range of economic, demographic and political (e.g., the Trudeau government’s push for new infrastructure) influences.

The engineering construction forecasts methodology employs the same approaches as for the non-residential building categories.

Yes, wending one’s way through all the foregoing steps is the only way I know to defeat the maze and, no, reciting the word ‘abracadabra’ over and over again won’t get the job done.

The following are some key observation points on the economy, demographics and construction markets that have been incorporated in the forecasts.

(1) Canada’s population is growing at a rate of +1.3% per year. At +450,000 individuals on top of 36.0 million, that’s the equivalent of a new city the size of Halifax each and every year. This carries significant implications for the additional living quarters that must be provided, along with back-up schooling and health care facilities, and roads and highways, plus all other manner of infrastructure works.

(2) Two easy-to-remember rules of thumb, with respect to population and gross domestic product (GDP), are as follows: Ontario is about 40% of Canada and census metropolitan area (CMA) Toronto is about 40% of Ontario. Therefore, Toronto accounts for approximately 16% (40% x 40%) of the total country by resident count and output. Toronto’s population is currently increasing by 70,000 per year.

(3) On account of lackluster global trade and weak commodity prices, Canada’s resource-dependent provinces have struggled with an uphill climb over the past two years. Finally, there are indications a turnaround is in the works. Saudi Arabia has abandoned its policy of depressing the price of oil and is now employing supply management to move the needle in the other direction. Each uptick in the price of crude will help Saudi Arabia raise more money when it proceeds with its Aramco IPO.

(4) The downtown office vacancy rate for Calgary may have ballooned to 25%, as reported by CBRE, but several other major cities in Canada have quite tight availability of space in their urban cores – Toronto, 4.4%; Vancouver, 7.7%; and Winnipeg, 8.9%. Most stock market investors think Toronto’s vibrant financial community will receive a boost once interest rates begin to rise again.

(6) Quebec has been quietly recording good jobs creation of late. The Finance Minister in the province recently introduced a third balanced budget in a row. Healthy government coffers are more conducive to undertaking public works projects.

(7) If the Keystone XL expansion gets underway – and it now has U.S. Presidential approval – then the laying down of pipe in Alberta and Saskatchewan will be a boon to those two Prairie provinces. Alberta will also warmly welcome the revenue from shipping 800,000 more barrels of oil to the U.S. per day. On both coasts, there are National Defence shipbuilding contracts to rely on and among all provinces, British Columbia – the nation’s gateway to trade with the Pacific Rim – is commonly judged most favored with natural advantages.

(8) There are some currency effects to take into account. Almost all commodities are priced in U.S. dollars. This provides a cushion for Canadian raw materials producers. Their revenues, as recorded in Canadian dollars, benefit from the conversion factor. The weak ‘loonie’ also helps promote the export sales of Canadian manufacturers (and some service providers) into the U.S. marketplace. Owners, both domestic and foreign, are aware of the exchange rate opportunities to be realized from undertaking capital expenditures in Canada.

(9) The federal government in Ottawa is high on infrastructure projects.  Commitments have been made, although observable groundbreakings have been slow to materialize. When all three levels of government (i.e., federal, provincial and municipal) last proceeded with a massive infrastructure spending program, in 2010-2011, much of the work that was brought forward was in the medical realm (e.g., hospitals). This time around, the spending is more likely to be on engineering/civil projects, with special emphasis on efforts to meet ‘green’ goals. For the success they can achieve in cutting carbon emissions, rapid transit projects will be especially popular.

(10) At the same time as there appears to be significant upside for Canadian construction activity, there are also ‘caution’ flags fluttering in the bureaucratic winds. Canada’s corporate sector, in competition to match profitability with its U.S. counterpart, will be challenged by the Trump administration’s plans to lower taxes, reduce oversight regulations and pay less heed to environmental issues. A stated desire for renegotiation of NAFTA provisions, as well as contentious words expressed after the expiry of the Softwood Lumber Agreement, offer early warning signs of possible trade conflicts with a more protectionist America.

The Canadian economy should soon be sailing out of becalmed waters. Nevertheless, some of the year-over-year percentage changes in the construction put-in-place forecast tables may seem high. On that score, there are the following considerations to keep in mind.

Just as commodity prices may be gradually escaping the doldrums, the long hiatus in the upward movement of construction material costs is probably nearing a turning point. Some forestry product prices have already moved up smartly.

As building material costs shift from a +2% per year upward path to +3% or more, the annual percentage changes in the ‘current’ dollar volumes of construction put-in-place will speed up as well.

Furthermore, the nominal gains will be on top of what are now relatively low ‘base’ levels. This is to say that the denominators in the mathematical percentage change calculations are often inordinately small.

Truer pictures of the movements in construction volumes is provided by the ‘constant’ dollar (i.e., adjusted for inflation) numbers. I previously mentioned that econometric trend lines were a helpful tool in setting the forecasts.

The latest versions of Excel allow the addition of a trend line to a graph with a single command check. (When the graph is highlighted, click on the “+” sign in the upper-right corner.) A small further ‘options’ step provides the trend line equation and the R2 value of the fit.

In the forecasting exercise, the trend lines were only applied to the ‘constant’ dollar figures, 2000 through 2017. There are some remarkably close correlations between the trend lines and the ‘actuals’ values. An R2 value can range from 0.00 (no correspondence) to 1.00 (complete correspondence). R2 above is 0.80 is a pretty good fit; above 0.90, it is an outstanding fit.

It would be easy to dismiss the trend lines as a forecasting aid by arguing that the future may bear little resemblance to the past. And that we are in different slow-growth times.

But it’s worth noting that the trend lines largely held sway even during the Great Recession. In 2009, grand total Canadian construction was -12.7% year over year, but it was only -7.3% compared with its trend line.

In each of the construction type-of-structure categories, the furthest out boundary (i.e., 2020) of their forecasts compared with their corresponding trend line values are as follows:

For residential construction, the Canada-wide forecast ‘actual’ in 2020 is -0.3% compared with ‘trend’.

For commercial construction, the Canada-wide forecast ‘actual’ in 2020 is +4.5% compared with ‘trend’.

For industrial construction, the Canada-wide forecast ‘actual’ is +18.5% compared with ‘trend’.

Industrial is one of two categories (engineering being the other) which can display extreme period-to-period swings. ‘Constant’-valued industrial put-in-place investment in 2020 will still be no greater than in 2012, when it was at its previous peak.

For institutional construction, the Canada-wide forecast ‘actual’ in 2020 will be -0.3% versus ‘trend’.

For engineering construction, the Canada-wide forecast ‘actual’ in 2020 will be -9.7% compared with ‘trend’. Engineering is the other category besides industrial that is subject to great volatility, often on account of the timing of site work on mega-sized projects.

For grand total construction, the Canada-wide forecast ‘actual’ in 2020 will be -3.3% compared with ‘trend’.

For ‘constant’-valued construction, a -3.3% figure relative to trend in 2020 certainly seems less than wildly optimistic.