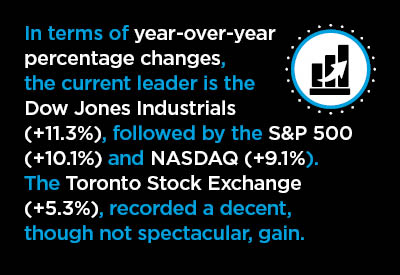 In the grand scheme of things, where equities can demonstrate wild volatility, this latest period of relative calm isn’t so bad, considering that all four indices continue to sit quite close to their 52-week highs. None of them has backed off by even as much as -2.0%.

In terms of year-over-year percentage changes, the current leader is the DJI (+11.3%), followed by the S&P 500 (+10.1%) and NASDAQ (+9.1%). The Toronto Stock Exchange (+5.3%), which has been a laggard compared with the others for a long while now – and especially since the commodity price super-cycle flipped over from boom to bust − recorded a decent, though not spectacular, gain.

Investors who were intrepid enough to keep their cool back in late-January and early-February of this year, when the indices touched their 52-week lows, have since ridden a price-appreciation wave that has surged from +18.7% for the DJI all the way to +26.6% for the aforementioned oft-maligned, but staging-a-comeback TSX.

Extraction firms in raw materials and companies engaged in financial services form the backbone of the TSX. It’s in the natural order of things that commercial lending binds the two of them together.

At the beginning of this year, many analysts were worried about what the potential for loan defaults in the energy sector, given the steep drop in the global price of oil, might mean for bank profits.

But that failed to fully take into account the strong reputation that Canadian banks have earned, internationally as well as at home, for their conservative practices. As of Q2 earnings statements, the body of opinion seems to have largely shifted. Canada’s banks are now judged to have set aside enough in loan loss provisions to weather most out-of-left-field contingencies.

At the same time, some analysts continue to tie their worries concerning the financial sector to the enormous scale of household debt that exists in Canada and which imperils mortgage-payment commitments for a slew of high-priced homes when interest rates do eventually start to rise again north of the border.

At least Q2’s weakness can be easily explained. It was mainly caused by the huge and devastating wildfire in northeastern Alberta. Many Oil Sands producers in the Fort McMurray region were temporarily forced to shut down operations and, as a result, exports of bitumen and crude to the U.S. plummeted.

Perhaps even more alarming for the construction industry, however, has been Canadian GDP‘s poor record of ‘gross fixed capital formation’ directed towards ‘nonresidential structures, machinery and equipment’. For that line item, the quarter-to-quarter percentage change has been negative, and often deeply so (i.e., down by more than -10.0%), going back to at least Q1 2015.

Ottawa’s promised program of enhanced infrastructure spending can hardly be rolled out soon enough. Although there is another sign of better times returning. Rebuilding efforts in Alberta and a resumption of production at fossil fuel sites has already lifted the month of June’s industrial-based GDP figure to +0.6% compared with May.

In the U.S., Q2 GDP growth was +1.1% (annualized) to go along with +0.8% in Q1. But America’s latest healthy employment and earnings increases (i.e., so important in promoting consumer spending) are pointing to better output prospects ahead.

Other than the campaign for election to the U.S. Presidency, the live theater event south of the border that is being accompanied by the most hype is the mystery play that asks the question, “Will the Federal Reserve raise interest rates in September?”

Interestingly, the answer to that query may be found not within the economic merits of the matter, but rather in the ramifications implied in the opening phrase of the above paragraph.

With the Democrats and the Republicans arguing vehemently about how the economy is unfolding, a further interest rate hike at this time would almost certainly embroil the Fed in political controversy.

Chairman Janet Yellen may well figure a more prudent course would be to delay action until after the vote in early November.