Stock Markets in a Happy Place, for Now

U.S. real (i.e., inflation-adjusted) gross domestic product (GDP) growth, after stumbling at only +0.8% in the first quarter and +1.4% in the second, skipped to a much livelier beat in the third quarter of this year, +2.9%, according to the Advance Estimate from the Bureau of Economic Analysis (BEA). 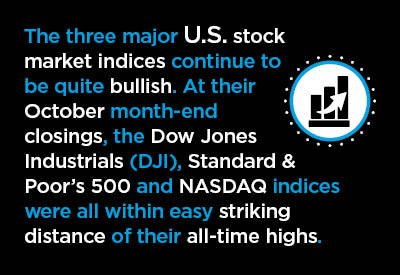 Q3 was also the best period for growth in 2015, but at +2.6% didn’t quite measure up to this year’s most recent quarter-to-quarter annualized advance. One has to jump back to Q3 2014 to find a faster rate of GDP increase, and at that time it truly was exceptional, +5.0%.

Personal consumption expenditures (PCE), increasing at +2.1% in the third quarter of this year, continued to provide much of the support for the overall GDP climb. But gross private domestic investment, at +3.1%, was also a contributor.

Private investment was led by capital spending on nonresidential structures, +5.4%, which was a significant reversal from flat or negative change in the six preceding quarters.

Residential investment, after contracting by 7.7% in Q2, pulled back a further 6.2% in Q3.

Table 2 in the Advance Estimate report from the BEA records the contributions to overall growth made by individual GDP line items. On average, over the past seven quarters, all of the increase in U.S. GDP has come from consumer spending. The weighting has been a little stronger from services than from goods. Within goods purchases, durables (e.g., motor vehicles, furniture, etc.) have outperformed non-durables (food, clothing, gasoline, etc.)

Since Q1 2015, residential construction’s minor contribution to GDP growth has been offset by mostly disappointing capital spending on nonresidential structures.

A small beneficial effect from government spending, led by state and local administrations more than Washington, has been counterbalanced by a weak net export (i.e., foreign trade) result.

As for the outlook for 2017 and beyond, there has been a remarkable shift on the energy front that should be bringing a smile to a lot more faces. The U.S. is now exporting natural gas.

Thanks to both the rapid and prolific development of shale rock deposits in many regions of the country, plus the recent opening of wider channels in the Panama Canal, permitting tankers to reach customers in Asia and Latin America at lower cost, U.S. LNG shipments, from terminals in Louisiana and Maryland initially, are expanding rapidly.

With the foregoing as backdrop and the U.S. presidential election just a short step away, the three major U.S. stock market indices continue to be quite bullish. At their October month-end closings, the Dow Jones Industrial (DJI), Standard & Poor’s 500 and NASDAQ indices were all within easy striking distance of their all-time highs.

But it should also be noted that those three indices have been beaten, year over year (+9.3% versus a range of +2.3% to +2.7%), by Canada’s major index from the Toronto Stock Exchange (TSX). Some of the share price enthusiasm north of the border comes from a belief that the bottom for energy and other commodity prices has been reached and relegated to the past.

Canada’s GDP numbers haven’t provided much cause for celebration. Q2’s output change north of the border was -1.6%, according to Statistics Canada. Much of the drop was due to late spring’s severe wildfire in northeastern Alberta that forced Oil Sands operators to cease production for a while. The month-to-month industry-based GDP change in May was -0.6%.

Some of Canada’s largest corporations, frustrated by a dearth of opportunities at home, have been pursuing acquisition targets in other nations, especially the U.S.

Earlier this year, TransCanada Pipelines, blocked from proceeding with a major portion of its Keystone XL expansion, slipped into buying mode and picked up Columbia Pipeline Group, which has contracts to ship output from hydraulic fracturing operations in the northeast U.S.

Enbridge, Inc. is the senior partner in its merger with Spectra Energy Corp. The combined company will be the largest gas distributor in North America.

Earlier this year, Canadian Pacific Railway Ltd. (CP Rail) made a concerted effort to woo Norfolk Southern, but was rejected.

The courtships have extended as far as convenience stores. Alimentation Couche-Tard (French for ‘goes to bed late’, or more colloquially, ‘night owl’) of Laval, Quebec has acquired Texas-based CST Brands, Inc., greatly extending its reach into the U.S. southeast. CST was created several years ago as a retail entity separate from the refining operations of Valero Energy Corp.