Ten Mid-February Economic Nuggets – With a Focus on Inflation Fears

At the beginning of February, there was a great deal of volatility in the U.S. major stock market indices. They fell into ‘correction’ territory, which in ‘market-talk’ means they dropped by 10% from their peaks, before steadying and heading cautiously upwards again. 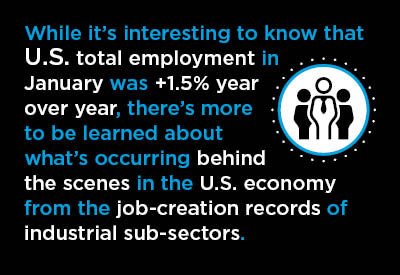 Some of the initial downward movement was due to profit-taking, on the heels of years of exceptional equity price gains. As the retreat grew more severe, however, it became harder to explain, especially since the recently passed tax cuts will provide an extra boost to corporate bottom lines.

A consensus explanation gradually emerged and it goes as follows. Yes, the economy is growing rapidly and job creation is outstanding. But maybe output growth and labor market conditions are too good. The level of unemployment has dropped near a historical low. Can wage restraint hold? Furthermore, there is a synchronous world expansion underway and commodities demand is heating up. Prices for key raw materials are climbing once again.

All these developments have the potential to light a fire under inflation. And if inflation is on the rise, the Federal Reserve may feel the need to initiate ‘cooling’ interest rate hikes faster than earlier anticipated. Some economic forecasting firms are already projecting there will be four, not three, interest rate increases this year.

Therefore, perhaps the hottest topic for discussion throughout 2018 will be how inflation is performing. Specifically, is the ‘Consumer Price Index for All Urban Consumers (CPI-U)’ busting free from its +2.0% (year over year) bondage and raising more havoc?

With the foregoing as background, there are the following additional observations with respect to inflation and other major metrics on the U.S. and Canadian economies to be laid out in this Nuggets report.

(1) The not seasonally adjusted (NSA) January ‘All-items’ CPI-U number from the Bureau of Labor Statistics (BLS) was +2.1% year over year. The ‘core’ rate of increase, which leaves out food and energy components, was +1.8% year over year. Neither of those increases is alarming. But they cover an entire 12 months. Another way of looking at the CPI-U results suggests there may be reason for a bit more concern. That methodology ‘annualizes’ more recent findings and it is described in the next bullet point.

(2) When the nation’s gross domestic product (GDP) numbers are announced throughout any given year, one of the yardsticks of change is always expressed as the quarter-over-quarter ‘annualized’ rate of progress. An explanation of ‘annualizing’ is warranted. The first step is to calculate the quarter-to-quarter percent change. The second step is to take that percent change and compound it for a full four quarters. In other words, it answers the question, “What would the growth rate be if it were to be maintained for all four quarters of an annual (i.e., calendar or fiscal) period?” Multiplying a Q/Q change by four yields a close approximation to the ‘annualized’ figure. For example, +1.0% Q/Q is +4.1% ‘annualized’; +2.0% is +8.2%; and +4.0% is +17.0%.

(3) The Excel spreadsheet formula to calculate a Q/Q ‘annualized’ change is “=(POWER((fill in the Q/Q % change)+1,4))-1”. Based on annualizing the most recent CPI results – which is what some grumpy analysts have been doing, − the inflation findings appear more upsetting. Annualizing the latest three-month-average for the seasonally adjusted CPI-U index divided by the previous-three-month-average yields an acceleration in inflation to +3.5%, well exceeding the +2.0% that is generally viewed as not only acceptable, but indeed desirable. (A little inflation is a good thing. As an example of a prime benefit, through personal income and company pricing increases, it makes repaying fixed debt easier.)

(4) The degree of concern being expressed about a latest-3-months-annualized inflation rate of +3.5% is overblown (see Graph 1). Annualized rates do swing up and down with greater amplitude than year-over-year rates. Prior to the Great Recession, there were a couple of months in 2005 and 2008 when the ‘annualized’ inflation rate soared to +8.0% or more. During the Great Recession, it sank to -10.6% at the beginning of 2019. Over the past nine years, the latest-3-months-over-prior-3-months ‘annualized’ rate of inflation has moved up to +3.0% or more on seven separate occasions, including now. The bottom line is that U.S. inflation still has a distance to travel before it becomes ‘enemy number one’.

(5) While it’s interesting to know that U.S. total employment in January was +1.5% year over year, there’s more to be learned about what’s occurring behind the scenes in the U.S. economy from the job-creation records of industrial sub-sectors. The strongest records of year-over-year jobs creation in January were chalked up by firms engaged in or providing: “machinery and equipment rentals’, +13.5%; ‘courier and messenger services’, +8.5%; ‘electronic shopping and electronic auctions’, +5.4% (although the +5.4% was down from May 2017’s +9.6%); ‘pet and pet supply store sales’, +5.1%; ‘temporary help services’, +3.4%; and − music to our ears, − ‘construction’, +3.3%.

(7) Canada’s housing starts in January 2018, at 216,000 units (annualized), were quite close to their monthly average throughout 2017, 220,000 units. The various measures introduced by three levels of government to turn down the ‘boil’ but not eliminate the ‘simmer’ in Canada’s residential real estate market appear to be working. In assessing the timing of interest rate hikes north of the border, the Bank of Canada knows it will need to be cautious about the impacts on debt servicing costs and especially mortgage servicing costs. The BOC is painfully aware that Canadians are already carrying debt-to-income ratios that are considerably higher than in the U.S.

(8) According to the Conference Board, U.S. consumer confidence rose again in January, after suffering a minor setback in December. The index level now stands at 125.4, up from 123.1 at 2017’s year-end. Given that the base value for the index is 1985 = 100.0, it’s apparent that optimism is currently running high. (In 1985, consumer sentiment was ‘middle of the road’. It was neither too frenzied nor in too short supply.)

(9) The Purchasing Managers’ Index (PMI) of the Institute for Supply Management (ISM) stayed elevated in January, at 59.1%. A PMI above 50.0% marks expansion of both manufacturing and overall economic activity; above 43.2%, the economy will be doing okay, but manufacturers will be dissatisfied; at 43.2% or below, nearly everyone will be disgruntled. The PMI has now exceeded 50.0% for 17 months in a row.

(10) The ISM says that, based on historical patterns, the current reading for the PMI, if it were to be maintained for the next 12 months, would match up with a ‘real’ (i.e., inflation-adjusted) annual GDP growth rate of +4.9%. To close out this latest Nuggets report, let’s return to our opening subject matter, ‘fears of inflation’. Respondents to the ISM’s survey each month are asked questions that go beyond merely ascertaining activity levels. One such sub-query concerns the supply and pricing of commodity inputs. For January, there was a lengthy list of commodities reported as being up in price. How many commodities were reported as being down in price? None.