How Tight are U.S. Construction Labor Markets? – Answer in 3 Graphs

How tight are U.S. construction labor markets? This article will address that question through the use of three graphs based on seasonally adjusted (SA) data from the latest (i.e., April 2017) Job Openings and Labor Turnover Survey (JOLTS) report, published by the Bureau of Labor Statistics (BLS). 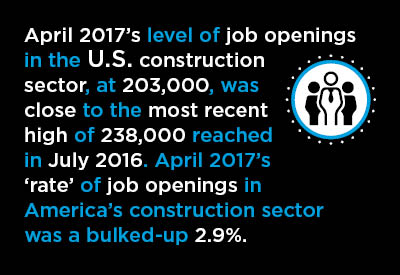 While April 2017’s ‘rate’ of job openings in America’s construction sector was a bulked-up 2.9% (i.e., many times greater than April 2009’s 0.4%, near the tail-end of the Great Recession), it wasn’t as aggressive as the 3.4% rung up twice in the second half of last year, in July and September.

Graph 2 displays U.S. construction jobs ‘quits’ numbers. The theory is that rising ‘quits’ levels and rates are positive coincident indicators concerning the strength of the economy. During prosperous times, more people will have the confidence to walk away from their jobs, believing they will be able to find new/alternative employment easily.

There were robust groundbreakings of single-family homes in 2005-2006 and such activity requires significant amounts of labor input.

At 2.4% in February, March and April of this year, construction’s quits ‘rate’ has reached a post-recession high. Still, it will need to increase by almost another percentage point to match the 3.2% of September and December, 2005.

Whereas Graph 2’s perspective on construction labor turnover is worker-centric, Graph 3’s is from the viewpoint of the employer. It shines a spotlight on ‘layoffs and discharges’.

It seems only logical that layoffs and discharges would be elevated in the worst of economic times and that’s confirmed in Graph 3’s sharp spikes in both ‘levels’ and ‘rates’ in 2009 and also in subsequent years extending through 2012.

Since 2014, though, employers have been reluctant to engage in construction sector labor dismissals.

The layoffs and discharges ‘rate’ has been similarly restrained. It dropped to only 1.9% in December 2015, but remained relatively tamped-down at 2.8% in April. By comparison, note that in April 2009, it ballooned to 6.5%.

During the 00s, the layoffs and discharges rate rarely retreated below 3.0%.

Apparently, construction sector employers, challenged by a limited supply of manpower, are making every effort to retain the workers they already have on their payrolls.

The conclusion to be reached from Graphs 1 through 3 is that strains are definitely being felt in the U.S. construction labor market. But while availability issues have certainly come to the fore, they are not yet of epic proportions.

Graph 4 is a bonus chart and it provides overview insight. U.S. total construction employment has risen dramatically since its most recent trough in January 2011. Total on-site construction jobs have returned to the level that was prevalent from 2000 through 2003, but they have not yet managed a repeat of their summit in 2006-2007, when there was a boom in homebuilding.

The not seasonally adjusted (NSA) unemployment rate in construction in May of this year was 5.3%, which was almost the same as May of last year’s 5.2%. Only on a few occasions has construction’s NSA jobless rate dropped below 5.0%. As shown in Graph 4, it has fallen to a floor level of about 4.5% three times since the turn of the millennium – in the summers of 2000 and 2016 and in the fall of 2006.

One would expect that the compensation going to construction workers would be increasing, and that has been happening to a slight degree. The Employment Situation Report published by the BLS records that average weekly and average hourly earnings in construction presently lie in a range between +2.2% and +3.3% year over year. Those gains are a little faster than the all-items CPI inflation rate for May 2017 of +1.9%.

Another measure of construction labor cost appears quarterly in the BLS release entitled Employer Costs for Employee Compensation. In that report for Q1 2017, the year-over-year increase for construction workers is a more substantial +4.7%. But this is a series that displays a great deal of volatility. Outsized increases, with minimal gains on either side of it, are not unusual.

Two possible developments could push the shortage of construction workers into a far more critical stage. First would be if single-family housing starts finally returned to where the historical ‘norm’ and demographic influences suggest they should be, around 1.2 million units seasonally adjusted and annualized (SAAR) each month. They currently reside around 800,000 units SAAR.

A second potential shock would result from serious and effective efforts to advance infrastructure spending. New and repair construction work on highways, roads, bridges, rapid transit systems and a host of other civil projects would send recruitment skyrocketing.

Before putting this subject matter to bed, there’s another bonus chart that deserves a look. Job openings in construction may be healthy at this time, but with respect to all jobs in the economy, they’re not as exceptional as one might suppose.

Graph 5 highlights that total job openings throughout the U.S. economy at present, measured according to both ‘level’ and ‘rate’, are at all-time highs.

In which jobs categories are positions being offered most generously? The three prime industry sub-sectors are ‘health care and social assistance’, ‘leisure and hospitality’ and ‘state and local government’.