The accompanying table records the 10 largest construction project starts in Canada in August 2016. Also included is the latest trend graph on starts. This looks at 12-month moving totals of the two major nonresidential building categories in Canada − total ICI starts and engineering work. ICI stands for industrial, commercial and institutional. 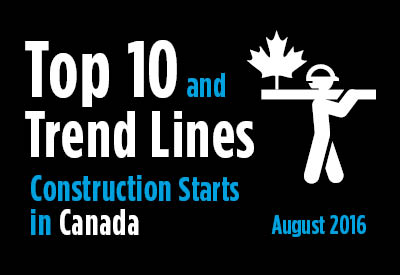 There are several reasons for highlighting upcoming large projects. Such jobs have often received a fair amount of media coverage. Therefore, people in the industry are on the lookout for when job-site work actually gets underway. And, as showcase projects, they highlight geographically where major construction projects are proceeding.

Top 10 projects of the month - August 2016
*A square footage measure does not apply for alteration and engineering work.
Data source and table: ConstructConnect – CanaData.
Trend lines of construction starts in Canada – August 2016
Moving totals of the latest 12 months*
(CanaData Figures)

*For example, the August 2016 figure is the sum of the monthly numbers for September 2015 through August 2016.
†ICI is the sum of industrial, commercial and institutional.
The prominent jumps in the engineering curve reflect such mega project starts as Horizon Oil Sands work in Alberta (March 2005), the Eastmain 1-A hydroelectric power project in northern Québec (June 2007), the Kearl Oil Sands Project in Alberta (April 2010), the Firebag 4 SAGD Oil Sands project in Alberta (June 2011) and the Voyageur heavy oil processing plant Alberta (August 2011). In May 2010, the ICI curve shot upward due to the McGill University medical centre project in Montreal. In March 2012, Alcan's modernization project in Kitimat was initiated.
Data source and chart: ConstructConnect – CanaData.