There are 51 metropolitan statistical areas (MSAs) in the United States with population levels above 1 million. Drawing from ConstructConnect’s data pool for those 51 cities, Table 1 ranks the Top 25 markets in America for educational facility construction starts last year. (Map 1 showcases the Top 20.) 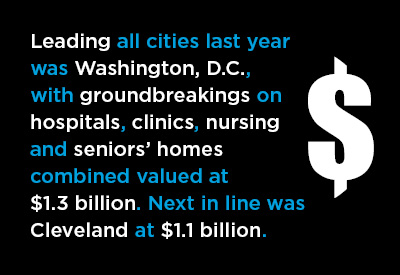 Notice the presence of a pair of cities in Ohio, i.e. Cleveland and Cincinnati, only a rung or two short of the summit in the dollar-volume listing.

There were surprisingly far-down placements, i.e. not appearing among the Top 25, for some of the nation’s major cities that have otherwise garnered attention for their rapid population increases or their well-regarded economic prosperity.

There are an inordinate number of cities in California appearing in the tally of U.S. urban areas with relatively weak dollar volumes of medical facility starts in 2018.

By the way, in the City by the Bay, the dollar volume of medical facility starts in 2018 was almost exactly split 50-50 between San Francisco and Oakland.

Table 1 features only cities of a million or more each. If smaller cities of less than a million residents were included in the ranking, five would have made it into the Top 25.

*There are 51 metropolitan statistical areas (MSAs) in the U.S. with populations exceeding one million.
Data Source and Table: ConstructConnect.