The previous report set out ConstructConnect’s construction starts for all U.S. states according to ‘lower’ and ‘higher’ education. The former refers to elementary and secondary schools while the latter has colleges and universities in its fold. 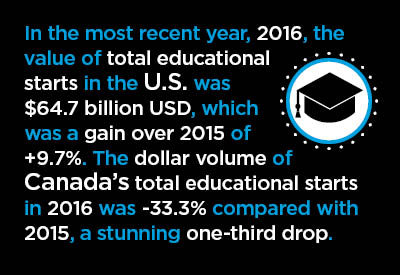 It was pointed out that for Canada, the history of starts contains only ‘total educational’ work, without making the separation. It’s a pleasure to report that from January 2017 on, the distinction will be made in the data base, but for now one must make do with the summary numbers.

In this article, there will be an examination of total educational starts, 2010 to 2015 averages and 2016 standalone numbers, for all the states and regions in America and most of the provinces in Canada, with those in the Atlantic combined in a single region.

The accompanying table shows that during the six years from 2010 to 2015, the average annual level of total educational starts in the U.S. was $53.0 billion USD. The average annual percentage increase in the dollar volume was +2.3%.

In the most recent year, 2016, the value of total educational starts in the U.S. was $64.7 billion USD, which was a gain over 2015 of +9.7%. 2016, relative to the prior half dozen years, was clearly a good time to be involved in America’s school-building business.

The same three states sat at the top of the rankings for dollar-volume educational starts both on average from 2010 to 2015 and in 2016: (1) Texas; (2) California; and (3) New York. It’s not a coincidence that those also happen to be large population states – although it should be noted that Florida, which is always included among the four biggest states based on resident counts, placed much further down the rankings for educational starts in 2010-2015 and in 2016.

Illinois was fourth, Pennsylvania fifth, Massachusetts sixth and Ohio seventh for dollar volume in the 2010 to 2015 period.

As for percentage changes from year to year, the regional pattern of increase was fairly smooth from 2010 to 2015. The Midwest was best with an average annual climb of +4.9%, but the West was only a small step behind, at +4.7%.

Nor did the Northeast, at +2.4%, have any reason to be embarrassed. Only the South (+0.5%) failed to make much forward progress.
But the South scored big in 2016, with a +21.2% performance in year-over-year value of total educational starts. The West placed second last year, at +16.1%.

In Canada, the dollar volume of total educational starts averaged $3.8 billion CAD per year between 2010 and 2015. The per annum percentage change during that stretch of time for the country as a whole was an impressive +9.1%.

But over the past two years, many of the provinces – faced with weakness in their raw materials sectors – have reined in their spending and the ripple effects have been widespread and nasty.

The dollar volume of Canada’s total educational starts in 2016 was -33.3% compared with 2015, a stunning one-third drop.

The western provinces of Saskatchewan, Manitoba and Alberta led the race in 2016 to see who could tighten their belts the most in the educational capital-spending area.