Total Employment Increase in U.S. and Canada in November +300,000

November’s Employment Situation report from the Bureau of Labor Statistics (BLS) records a net gain in U.S. total jobs during the month of +228,000. 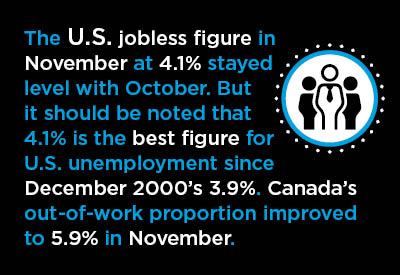 The latest Labour Force Survey from Statistics Canada highlights hiring north of the border in November rising by +80,000 jobs.

Therefore, total payrolls in the U.S. and Canada combined climbed by +308,000 in the second last month of this year, a quite strong showing.

Furthermore, the unemployment rates in both nations are now sitting at exceptionally low levels.

Canada’s out-of-work proportion improved to 5.9% in November from 6.3% in October.

The latest unemployment rate for Canada is the best since February 2008 (also 5.9%). More startling, though, is the fact that in the entire history of Statistics Canada’s seasonally-adjusted jobless numbers, there has been only one month with a figure lower than now – October 2007 at 5.8%.

November’s jobs spurt of +228,000 added to October’s even heftier burst of +244,000 has yielded a latest-two-months surge of nearly half a million.

The monthly average of total U.S. jobs creation from January through November of 2017 has been +174,000. Surprisingly, that’s a little slower than the +190,000 number for the same first-eleven-months period of 2016.

The U.S. construction sector’s not seasonally adjusted (NSA) unemployment rate is currently 5.0%, whereas a year ago in November 2016 it was 5.7%.

For all workers in America’s economy, including supervisory personnel, average hourly earnings are +2.5% year over year and average weekly earnings are +3.1%. Construction workers are faring a bit better hourly, +2.9%, but a tiny degree worse weekly, also +2.9%.

For economy-wide workers not including bosses, the U.S. average hourly and weekly rate gains this November were +2.3% and +2.6%. Construction’s comparable numbers were +2.7% and +2.2%.

Canadian construction has edged up slightly to +4,000 jobs as a monthly average so far in 2017 compared with +2.000 for January through November 2016.

The good news story for Canada has been the way in which full-time employment growth has become so dominant. Full-time jobs on average in 2017 have been +34,000 per month. In 2016, they registered no average month-to-month change whatsoever.

In Canada’s regional labour markets, the fastest year-over-year rates of employment increases have occurred in British Columbia, +3.8%, and Prince Edward Island, +3.5%. Ontario is the other province with a performance, +2.6%, considerably better than the national figure.

Nominal year-over-year jobs creation in Canada has amounted to nearly +400,000. The key provincial contributions to that outsized jump have come about half from Ontario, a quarter from B.C. and a fifth from Quebec.

With respect to favorable (i.e., low) provincial unemployment rates, B.C. is currently the nation’s leader, at 4.8%, followed by Manitoba and Quebec, both at 5.4%.

A truly special situation, however, has arisen in Quebec. In ‘la belle province’, the unemployment rate has now dipped below any other month on record going all the way back to January 1976.

Central bank decision-makers in both the U.S. and Canada will peruse the foregoing mainly upbeat numbers and become more firmly resolved to get on with hiking interest rates.