PEI, BC, and Quebec Show Growth in Canadian Labour Market

On the heels of outstanding month-to-month jobs growth nation-wide in June (+45,000) and May (+55,000), July’s increase was comparatively subdued, at only +11,000 according to the latest Labour Force Survey report published by Statistics Canada. 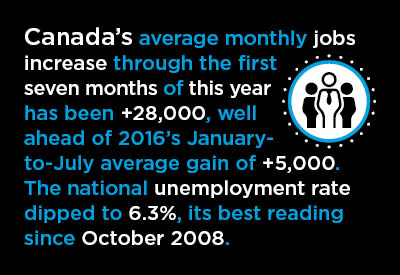 An especially sweet note for Canada in July, however, was provided by the national unemployment rate which dipped from 6.5% the month before to a current level of 6.3%, reducing it to its best reading since October 2008 (6.2%).

At its lowest in this century – i.e., 5.8% in October 2007 – the jobless rate was only half a percentage point better than now.

Canada’s average monthly jobs increase through the first seven months of this year has been +28,000, well ahead of 2016’s January-to-July average gain of +5,000.

Canadian manufacturers (+14,000) made a solid addition to their payrolls in July, while contractors (-9,000) cut staffing.

Year-over-year employment in manufacturing (+3.2%) is now speeding ahead of construction (+1.9%).

Most of the foregoing provinces have relatively small manufacturing bases. Ontario and Quebec provide the bulk of the nation’s production-line work, and those two provinces have recorded y/y increases of +1.6% and +1.5% respectively.

There are only two provinces with job creation performances superior to the national averages for services, manufacturing and construction − PEI and BC. With just a bit better record in manufacturing, Manitoba (+3.0%) would have turned the duo into a trio.

Where Manitoba has shone this year, relative to its siblings, has been in housing starts. The province’s +94% year-to-date leap in residential groundbreakings has far outdistanced the +8% for the country as a whole.

Also, note from Table 1 that Manitoba (at 5.0%) currently has the lowest unemployment rate among all the provinces, with second place belonging to BC (5.3%).

Besides the benefits to society at large (i.e., through promoting a more content populace), the economic point of wanting a low unemployment rate and strong jobs growth is that they are almost always accompanied by higher earnings and more spending.

The following bullet points record the y/y results for both average weekly earnings (from the latest Payroll Employment, Earnings and Hours report) and retail sales (from Statistics Canada’s Cansim Table 080-0020) for each province. The percentage changes are based on ‘current’ (i.e., not adjusted for inflation) dollars:

To provide perspective, the Canada-wide percentage changes have been +2.0% for weekly earnings and +7.3% for retail sales.

Only one province is currently beating the national averages on both counts – BC.