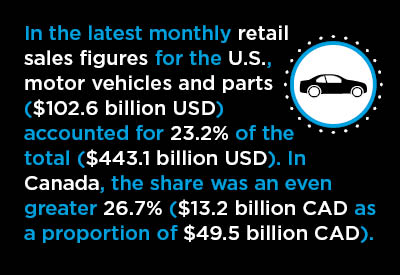 There can be no doubt about the importance of the auto sector to the economies of the U.S. and Canada. But uncertainty about the future of NAFTA and an overhanging cloud of possible tariff action that would harm the back and forth trade in motor vehicles and parts between the two countries are causing considerable anxiety among business leaders both north and south of the border.

Therefore, it’s advisable to examine some of the statistics on the industry to gain a better appreciation of the issues involved.

Since consumer spending is such a major component of gross domestic product (GDP), let’s begin by looking at ‘auto and related’ sales as a proportion of total retail spending.

Let’s extend our reach and include gasoline purchases along with motor vehicle and parts sales. In the U.S., the revenue taken in by gasoline stations in May was $43.0 billion USD. In Canada, the comparable figure was $5.5 billion CAD.

When the relevant numbers are summed, combined motor vehicles, parts and gasoline sales as a share of total retail sales in the latest reported period were 32.9% in the U.S. and 37.8% in Canada. In other words, they were either nearly or more than one-third of total retail sales.

(It should be noted that most gasoline stations no longer sell just petrol. They are also convenience stores, filled with shelf and fridge space to supply customers with milk, snacks and other sundry items.)

How about employment statistics from the ‘auto and related’ sectors?

From May’s Employment Situation report published by the Bureau of Labor Statistics (BLS), there were 957,000 people working for auto and parts manufacturers in the U.S.

There were more than twice as many individuals, 2.026 million, engaged in the industry on the retail side, with dealerships and parts and tire stores.

There were almost a million workers (939,000) with gasoline stations.

The subtotal from the three industry niches set out above is nearly four million jobs (392,000).

Plus, there are other corners of the economy where employment is directly tied to motor vehicles. In ‘truck transportation’, there are 1.477 million jobs; in ‘transit and ground passenger transportation’, 495,000; and with ‘courier and messenger’ services, 737,000.

The total has now climbed to 6.632 million jobs. What’s interesting, though, is that the 6.6 million figure falls short of the number of jobs in the construction sector, as reported in the BLS Employment Situation report – i.e., 7.2 million spread out among general and trade contractors.

And the construction number doesn’t even include those employed by manufacturers to make building products. As has often been stressed in my articles, construction’s enormous role in the economy remains under-appreciated.

Tables 1, 2 and 3 record the export and import numbers the U.S. has been registering to date this year (i.e., January-April) with its seven major partners in auto and parts foreign trade. Those seven countries, in alphabetical order, are: Canada, China, Germany, Japan, Mexico, South Korea and the United Kingdom.

Included among the ‘other’ designation in the three tables are Australia, Italy, Sweden, the United Arab Emirates and Saudi Arabia.

The statistics come from Exhibit 18 of the Monthly U.S. International Trade in Goods and Services report compiled jointly by the Census Bureau and the Bureau of Economic Analysis (BEA).

The highlights from the three tables are as follows.

From Table 1, through the first four months of this year, America is running a total auto sector foreign trade deficit of -$65.5 billion. But there is one country with which the U.S. is in surplus – Canada. The justification for the U.S. imposing tariffs on Canadian imports would seem to be elusive.

The major contributors to the U.S. total trade deficit in motor vehicles and parts are Mexico and Japan. The share of the shortfall originating with Mexico is 42.9%; with Japan, it’s 28.0%.

With respect to ‘cars, trucks and buses’, the one country with which the U.S. has a trade surplus is China. ‘Other’ is also on the surplus-side of the ledger.

A major problem for the U.S. is that it is exporting – or more correctly, being permitted to export − so little to Japan and South Korea. There are higher dollar volumes of U.S. ‘car, bus and truck’ exports to Saudi Arabia and the United Arab Emirates than to those Pacific Rim countries.

But here’s another surprise. While it was way back of Canada, the occupant of second place was China, with an 11.6% slice of American ‘car, truck and bus’ exports.

From Table 3, the geographic origins of the U.S. trade deficit in ‘parts’ have been somewhat more spread out. Mexico (42.3%) has been the source of the biggest share of the shortfall, but China (22.3%) and Japan (20.7%) have also been prominent deficit contributors.

On the flipside, the U.S. has run a slight trade surplus in ‘parts’ with the U.K. and a big surplus with Canada. Without the surplus from Canada, the U.S. trade deficit in ‘parts’ would have been one-fifth higher.