U.S. and Canadian Motor Vehicle and Parts Sales According to the Numbers

Back in the ‘good old days’, when the purchase of a family car meant everything, a saying emerged that ran, “What’s good for General Motors is good for the U.S.A.” 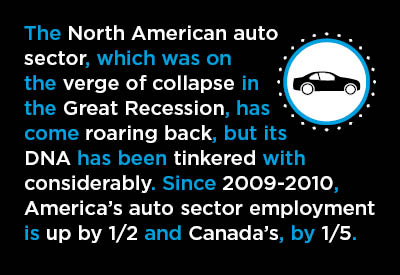 The North American auto sector, which was on the verge of collapse in the Great Recession, has come roaring back, but its DNA has been tinkered with considerably.

Employing eight graphs, this article will examine the changing structure of the industry, and some subtle and not so subtle differences south and north of the border.

Graphs 1 and 2 show the history of moving 12-month total unit sales of passenger cars plus light trucks in both countries. Since the first available data point for the U.S. is January 1977, that date has been chosen as the starting point for the Canadian series as well. Covering the same time frame makes comparisons easier.

Trend lines have been fitted to Graphs 1 and 2. In both instances, the trend line is obviously rising, although it has been doing so with a steeper slope in Canada than in the U.S.

Graph 1 highlights the strong recovery in U.S. motor vehicle sales since 2009. They are nearly +70% versus their most recent low point eight years ago. They’ve eased off a little in 2017, but at their peak of 17.6 million units in 2016, they matched their previous pinnacle achieved in September 2000.

The U.S. managed a seven-year stretch of exceptionally strong motor vehicle sales between 2000 and 2006, before the bottom fell out.

From Graph 2, it’s clear that Canadian auto sales are currently enjoying an unprecedented level of success. At 2.0 million units presently, they are one-third (+34%) higher than at their last low point in late 2009 and one-sixth greater (+16%) relative to the past twin peaks of 1.7 million units realized in 2002 and again in 2008.

To make the U.S. versus Canadian comparisons even easier, unit sales are expressed as indices in Graphs 3 and 4.

Graph 4 focuses on more recent performances (i.e., from the turn of the millennium). For both countries, it sets unit-sales in January 2000 equal to 100.0.

Motor vehicle sales in the U.S. and Canada followed almost exactly the same up and down patterns – with the exception of Canada having quite a bit more of a dip in the mid-1990s – all the way from Graph 3’s starting point in January 1977 right up until the onset of the Great Recession in 2008.

Graph 3 sets the big decline in auto sales in the Great Recession in perspective. There were also outsized contractions in both countries in the early 1980s.

Canada’s gains on the auto sales front, relative to the U.S., since the Great Recession are rendered more apparent in Graph 4. Having not succumbed as severely in 2009, it has been easier for the auto market north of the border to make steady advances during the intervening seven year.

Graphs 5 and 6 spell out which kinds of auto products are moving fastest out of showrooms. Passenger cars have diminished in favor relative to what are termed ‘light trucks’. The latter encompasses vans, mini-vans, sports utility vehicles (SUVs) and run-about trucks (i.e., not the long-haul variety).

The shift to ‘light trucks’ has taken hold in both countries, but it appears to have become even more extreme, of late, in Canada.

This has been an extraordinary development given that society has so outwardly embraced the goal of striving for a cleaner environment through cutting carbon emissions.

Although ‘light trucks’ have made great strides in upgrading fuel efficiency, they still can’t claim to be as positive for the atmosphere as passenger cars. Nor as cheap to operate, although the bargain-basement price of oil since mid-2014 has largely removed the cost of gasoline from the vehicle-buying decision-making process.

Which carmakers are currently doing best in the U.S.?

According to Autodata Corp., April year-to-date (ytd) motor vehicle sales in America are being led by General Motors (933,000 units and -1.1% compared with January-April 2016).

Notice that only Nissan, among the Top 5, has rung up a unit-sales increase through the first four months of this year.

Volkswagen, which has been going head-to-head with Toyota to claim the title of largest auto manufacturer in the world, is not a major player in the U.S. marketplace (169,000 units, but +7.9% ytd).

Maserati has ‘engineered’ a big increase in unit-sales (+37.3% ytd), but that’s still only 4,553 individuals with the financial wherewithal to impress nearly everybody, versus 3,316 at this time last year.

Sales by Tesla Motors Inc. have been estimated by Autodata at 15,600 units to-date this year, ahead by nearly fifty percent (+49.3%) compared with the first third of 2016.

DesRosier Consultants is saying that -4.3% for passenger car sales is being more than made up by +6.1% for light trucks to yield a total light vehicle sales figure for Canada that is +2.5% ytd.

The final two graphs in this EAAG, numbers 7 and 8 showing employment in motor vehicle assembly and parts production in the U.S. and Canada, have quite similar appearances. In both instances, the payroll curves began elevated, but then they skidded badly as work was both offshored and reduced through automation.

The Great Recession brought trough levels that marked a 50% drop in U.S. auto sector staffing and a reduction by one-third in Canada. Since 2009-2010, America’s auto sector employment is up by half and Canada’s, by one-fifth. But neither nation has returned to anything like the lofty jobs levels in earlier days.

How important is the auto sector to gross domestic product (GDP)?

As a ‘rough and ready estimate’, retail sales provide a good entry point. Personal consumption expenditures (PCE) are 70% of U.S. GDP. Retail sales are about half of PCE. (Expenditures on services make up most of the other half.)

The capacity utilization rate of ‘motor vehicle and parts’ manufacturing in the U.S., as calculated by the Federal Reserve, is currently 82.2%. That’s a relatively high number and is a forward-looking indicator that suggests firms in the industry are at least considering more capital spending.

The capacity utilization rate for the ‘transportation and equipment’ sector in Canada – a category in which vehicle assembly and parts manufacturing is dominant, but which also includes airplane and boat manufacturing – is tighter at 87.2%. (It should be noted that Canadian capacity utilization numbers, as a mathematical calculation, generally run above those in the U.S.).

With the Trump Administration announcing it wants a renegotiation of NAFTA, investment in the Canadian auto sector appears to be less assured.

In the trade-framing discussions that lie ahead, both countries would do well to remember the closely interrelated supply and demand relationships that link their almost mirror-image auto sectors.