U.S. net total jobs creation in the final month of last year was a tepid +148,000, according to the latest Employment Situation report from the Bureau of Labor Statistics (BLS). The ‘weakish’ December result caused the monthly average throughout all 2017 to pull back slightly to +171,000. 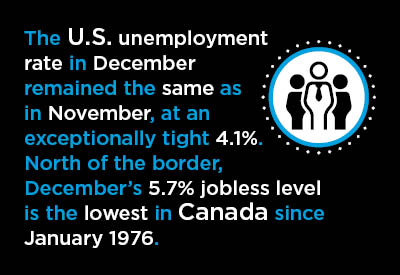 The U.S. unemployment rate in December remained the same as in November, at an exceptionally tight 4.1%.

The seasonally adjusted (SA) number of U.S. construction jobs recorded a nice gain in December of +30,000. Such a substantial increase in employment for on-site workers was the biggest leap since February 2017’s +54,000.

But the biggest news for construction lay in the compensation figures. For all construction workers, including supervisory personnel, average weekly earnings soared +4.0% year over year, the best gain for that ‘metric’ since December 2015’s +4.0%.

For construction workers excluding bosses, the average weekly earnings climb was an even more impressive +4.7%. The last time +4.7% was matched or exceeded occurred in September 2016, at +5.2%.

Year-over-year hourly earnings for construction workers in December were +3.0% including bosses and +3.1% leaving out bosses.

Wages for all U.S. workers economy-wide, however, continued to be subdued in the latest month. Including supervisory personnel, average hourly earnings were +2.5% and average weekly earnings, +2.8%.

Omitting bosses, average hourly earnings for all workers were +2.3% and average weekly earnings, +2.9%.

The bottom line is that wage gains for most jobs are still meeting resistance at the +3.0% level.

Another sector registering significant month-to-month jobs growth in the latest month was manufacturing, +25,000. Over the past five months, production-line firms have expanded their payrolls by +132,000 jobs.

Other major industrial sub-sectors with sizable month-to-month jobs hikes in December were ‘leisure and hospitality’, +29,000, and ‘education and health services’, +28,000. The former was particularly bolstered by ‘food services and drinking places’, +25,000, while the latter was all driven by ‘health care and social assistance’.

‘Professional and business services’ jobs creation in the latest month was disappointing, only +19,000. Employment in ‘accounting and bookkeeping services’ took an especially bad turn, -15,000.

Shocking on the downside in December was a -20,000 month-to-month jobs performance in the retail trade sector. The contraction in staffing at ‘general merchandise stores’ was -27,000. But keep in mind that the foregoing two declines are expressed in seasonally adjusted (SA) numbers.

Thanks to gift-giving over the winter-break holiday season, December is the busiest shopkeeper month of the year. The month-to-month not seasonally adjusted (NSA) retail trade employment number in December 2017 was +59,000.

North of the border, December was another banner month for employment, according to Statistics Canada. The latest Labour Force Survey records a shrinkage in the unemployment rate from 5.9% in November to 5.7% in December.

December’s 5.7% jobless level is the lowest since January 1976, over fifty years ago.

By comparison, America’s December 2017 over December 2016 addition to total jobs was +2.1 million − but the population of the U.S. is nine times bigger than Canada’s.

Canadian construction employment in December was +7,000 month to month, while manufacturing employment was -4,000.

On a year-over-year basis, manufacturing employment has made more headway than construction employment, +85,000 compared with +51,000.

It’s British Columbia, however, that can boast of having the lowest jobless rate in the land, at 4.6%.