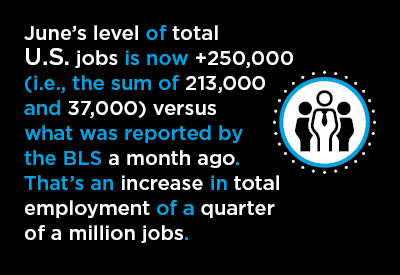 June’s Employment Situation report from the Bureau of Labor Statistics (BLS) records a pickup in total jobs of +213,000 in the latest month.

But that +213,000 compares June’s level of total jobs with a revised figure for May. May’s figure is now being estimated higher by +37,000 vis à vis what was reported for May a month ago.

The gain in U.S. total employment through the first half of this year has been 1.3 million jobs. In H1 of last year, the increase was 1.1 million.

The unemployment rate in June fell back slightly to 4.0% from 3.8% in May. The retreat was because the continuation of strong employment prospects has caused a month-to-month uptick in the participation rate, to 62.9% from 62.7%.

Among industrial sub-sectors, the three standouts for jobs improvement in June were: ‘education and health services’, +54,000; ‘professional and business services’, +50,000; and in a long-time-coming and pleasantly-welcome development, ‘manufacturing’, +36,000.

The leap in manufacturing employment was almost all within the durable goods realm, +32,000.

‘Professional and business services’ (+28,000) is where most of the outsized revision to May’s total jobs number (+37,000) originated.

As for the jobs-creation performance of the general and sub-trade contracting industry in June, however, the motion forward was a little disappointing, +13,000 jobs.

Nevertheless, the average monthly increase in U.S. construction employment through the first half of this year has been +25,000, up from +20,000 for January-to-June of 2017.

Almost half of June’s construction jobs increase (+13,000) occurred in the ‘heavy and civil engineering’ category, +6,000.

The surge in construction wages lost a little momentum in June. There are two tables focusing on compensation in the Employment Situation report, B-3 and B-8. The first, B-3, is for all workers, including supervisors. The second, B-8, is for only production workers, leaving out bosses.

Just the same, in five of the six months prior to June, construction workers (not including bosses) saw weekly earnings hikes of more than +4.3% year over year. (December 2017 and April 2018 crossed above +5.0%.)

‘Retail’ hiring, however, was down in the dumps, -22,000 jobs. Within ‘retail’, ‘building material and garden supply stores’ kept their payrolls flat. It was ‘general merchandise stores, including warehouse clubs and supercenters’ that initiated the big cuts, -18,000 jobs.

The bottom line is that the buoyancy in June’s U.S. labor market statistics will reaffirm the Federal Reserve’s view that the economy is doing super-well at present and that further interest rate hikes will be justified.

But there is a matter about which the Chairman of the Fed, Jerome Powell, is beginning to express concern, the threat from an escalating tariff ‘war’. On the same day as the release of June’s jobs report, the U.S. and China are imposing duties on more than $30 billion-worth of each other’s goods.

The long-in-the-tooth nature of the current boom cycle, generally rising interest rates and foreign trade conflicts are among the reasons investors have been leaving major stock market indices around the world in neutral this year.