President Trump will be of two minds when he sees the latest labor market numbers from the Bureau of Labor Statistics (BLS). April’s Employment Situation report records another month of exceptional jobs growth, +263,000, and a notable decline in the unemployment rate to only 3.6%, which is as low as that metric has been in half a century. Furthermore, 3.6% was the seasonally adjusted (SA) rate. The not seasonally adjusted (NSA) jobless level was even tighter, at 3.3%. 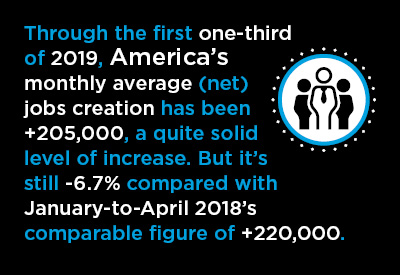 But the good news with respect to jobs means that there is now even less likelihood that the Chairman of the Federal Reserve, Jerome Powell, will pay heed to the President’s advice to lower interest rates. The needle on the central bank’s ‘yield meter’ has undoubtedly swung away from mildly dovish towards perhaps hawkish once again.

There were also more staff additions with government (+27,000) than in many recent months. The entire increase with the public sector was achieved at the local level, as the jobs gain federally (+11,000) was wiped out by the jobs loss among states (-11,000).

On a year-over-year percentage-change basis, construction (+3.5%) led all sectors in the latest month, with ‘transportation and warehousing’ (+3.3%) in close pursuit. ‘Leisure and hospitality’ (+2.8%), ‘professional and business services’ (+2.6%) and ‘education and health’ (+2.5%) also managed y/y jobs advances that were greater than for the whole economy (+1.8%).

Hourly and Weekly Wages and Earnings

For all that there’s a surfeit of good news concerning the U.S. employment scene, a baffling mystery remains. The unemployment rate has plunged to a record low, but wages remain subdued.

For all employees in America’s economy in April, year-over-year average hourly earnings were +3.2% and average weekly earnings, +2.9%. For production workers only (i.e., leaving out supervisory personnel), the income hikes were +3.4% hourly and +3.1% weekly. With inflation at +2.0% y/y, workers are barely making earnings headway.