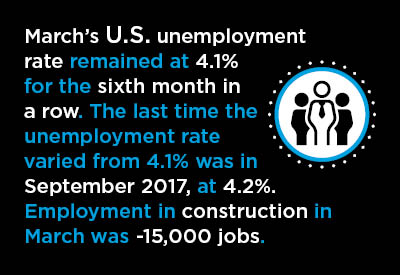 After an outstanding net employment gain of +326,000 in February, the U.S. economy took only a modest step forward of +103,000 jobs in March, according to the latest Employment Situation report from the Bureau of Labor Statistics (BLS).

That the jobs market is extraordinarily tight is confirmed by several other statistical reports.

Weekly initial jobless claims have now stayed below 300,000 for more than 160 consecutive weeks, which amounts to more than three years.

On three occasions in 2018, the weekly initial jobless claims number has fallen below 220,000, which is better than at any other time in the history of the series dating back to its launch point in the 1960s.

Total job openings from the latest JOLTS report both in terms of level and rate, are currently at record highs for this century, well above their peaks immediately prior to when the recession took hold in 2008.

Workers are confident enough they will be able to find alternative better employment that the ‘quits’ level from the JOLTS report has also been soaring and now sits above its 2006 perch as well.

As for the participation rate of individuals aged 25 to 34, it has been climbing for the past two-and-a-half years, indicating that millennials are finally getting serious about their careers.

As millennials increasingly mainstream into the workforce, enjoy higher stable wages and form families and begin raising children, there will be ripple effects throughout the economy – for example, on home-buying and consumer spending.

The strength emanating from the labor side of the economy has almost guaranteed that the Federal Reserve will be aggressive in its interest rate stance this year. A total of three 25-basis-point increases (where 100 basis points = 1.00%) has been widely anticipated, with some prognosticators recently upping their count to four hikes.

There is, however, another possibility to consider. Many economists, stock market investors and even quite a few members of Congress have concerns about the confrontational approach that President Trump is taking with respect to foreign trade.

It’s not inconceivable that new Federal Reserve Chairman Jerome Powell, and other board members, worried about the harmful effects of a ‘trade war’ with China, may postpone or stretch out the central bank’s previously-established schedule of interest rate increases.

If such were to occur, in what light would it be seen by the White House? Would it be viewed as tacit and unwelcome criticism of the Administration’s management of the nation’s economic affairs?

Would it set the stage for a nasty confrontation, − i.e., one that would test whether the Fed remains independent from political influence?

President Trump has famously clashed with many members of his staff and cabinet with respect to domestic and foreign policy. Will the ‘lightning strike and the thunder roll’ if there is a falling out between the President and his appointee, Mr. Powell?

A key test for the President’s economic policies will come in the form of incremental construction investment.

The put-in-place construction investment numbers in the latest month, February, were almost flat versus January.

Employment in construction in March was -15,000 jobs.

On the plus side for construction workers in the latest month, they saw their earnings spike.

Average weekly earnings for production and non-supervisory workers in construction in March were +5.0% year over year. Average hourly earnings for the on-site contingent were not as bullish, +3.4% y/y.

Both of those wage gains for construction, however, were ahead of the comparable figures across all ‘production and non-supervisory’ jobs in the economy. For all jobs, not including bosses, the y/y pay increases were +2.7% weekly and +2.4% hourly.