U.S. May Jobs Growth Failed to Impress, But the Unemployment Rate was a Stunner

Not only did the U.S. jobs creation machine slip a cog in May, but there were some pretty severe downward revisions to previous months as well. According to the Bureau of Labor Statistics (BLS), the increase in total employment across America in the latest month was a tepid +138,000. 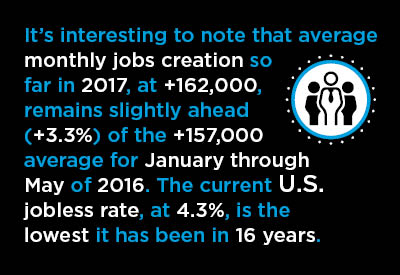 Also noteworthy in the latest Employment Situation Report was the further small dip in the unemployment rate, from 4.4% in April to 4.3% in May. The current jobless rate, at 4.3%, is the lowest it has been in 16 years, dating back to May 2001.

Is there room for more improvement in the U.S. jobless rate? Possibly, but it should be recognized that the occasions on which the unemployment rate has dropped below 4.0% have been rare. Since the turn of the millennium, it has only happened in the year 2000. April of that year had an unemployment rate of 3.8% and the four consecutive months from September through December 2000 managed 3.9%.

What’s known as the ‘U-6’ unemployment rate (from Table A-15 of the Employment Situation Report), which is more all-encompassing, since it includes both individuals who are only ‘marginally attached’ to the labor force, plus those who are working part-time but would prefer full-time positions, also dropped between April and May, from 8.6% to 8.4%. The last time U-6 was as favorable was in September 2007. U-6 soared above 17.0% in the Great Recession.

The employment results for construction in May were unexciting. Hiring in the sector was a lukewarm +11,000. The not seasonally adjusted (NSA) unemployment rate shrank to 5.3% from 6.3% in April, but it was just about on a par with May of last year’s 5.2%.

Year-over-year average hourly and average weekly earnings for construction workers in May were +2.2% and +2.5% respectively. For all workers in the economy, the comparable figures were +2.5% hourly and the same +2.5% weekly.

Not including supervisory personnel, field workers in construction fared a little better. Their average hourly earnings were +2.5% and their average weekly earnings, +3.3%. For all non-boss workers, across all industries, hourly and weekly wage gains were both +2.4%.

As for which industries led the way in expanding payrolls in May, ‘education and health’ was the frontrunner, at +47,000 jobs, followed by ‘professional and business services’, +38,000, and ‘leisure and hospitality’, +31,000.

The ‘retail’ sector shed 6,000 jobs in May. The year-to-date pull-back in retail employment has been -45,000 jobs. The news from ‘bricks and mortar’ shopkeepers continues to be distressing. The number of outlets scheduled for closing this year by Sears and its subsidiary Kmart has just ballooned from an earlier-announced 180 to 250-plus.

Firms engaged in ‘financial activities’ (e.g., banks, insurance companies and realtors) stepped up their hiring once again in May. The latest month’s increase of +11,000 brings the sector’s year-to-date figure to a quite decent +64,000.

The collapse of a number of high-profile financial services enterprises initiated the Great Recession. Then the ‘credit crunch’ took hold and new regulatory directives to increase capitalization were introduced. The sector has finally cut its way through the bramble and its level of total employment is now matching its previous peak.

Manufacturers in May kept their level of total employment almost steady (-1,000 jobs). The unemployment rate in manufacturing, however, has tightened to 3.2%. A year ago, in May 2016, it was 4.7%.

On a year-over-year percentage change basis, manufacturing’s employment performance has been +0.5%. By way of comparison, the figure for total jobs in the U.S. is now +1.6% y/y, with the services-providing sub-component being +1.8%. Construction is considerably better at +2.9%.

Delving into the latest Employment Situation Report on a more granular level, there’s one statistic that is waving its arms for attention. Whereas the unemployment rate in ‘mining, quarrying and oil and gas extraction’ a year ago was 11.1%, it has now moved – in just 12 months − to an almost unbelievably miniscule 2.5%.

Apparently the U.S. energy sector, spotting the potential for revenue lift from the updraft in the world price of oil (i.e., from $30 USD per barrel to around $50), has been quick to re-instate portions of previously mapped-out drilling and exploration activity.

In two other areas of resource development, logging and coal mining, year-over-year employment in May was -1.7% and +2.4% respectively. In forest products, the U.S. has recently imposed a substantial duty on softwood lumber imported from Canada. And in coal mining, the Trump Administration has pledged support for an industry that has been battered by carbon-emission concerns and the enhanced competition that has come from abundant and cheap (and environmentally ‘cleaner’) natural gas.

For the second time in a row, employment at architectural and engineering firms stayed flat (0.0%) m/m, but it was an encouraging +3.1% year over year in May. This is an upbeat advance indicator for construction. The capital spending dreams of owners must first be converted into assembly instructions by designers before they can physically take shape at job sites.