May was the second-best month of this year so far for jobs creation, according to the Bureau of Labor Statistics (BLS)’s Employment Situation Report. The latest month’s figure of +223,000 jobs was runner-up only to February’s +324,000. 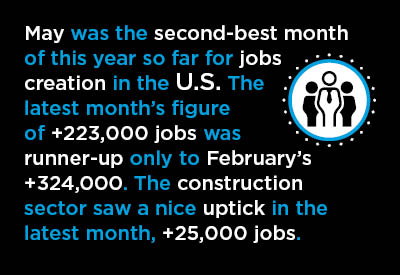 The ‘headline’ unemployment rate – officially designated as U-3 in Table A-15 of the Employment Situation Report − shrank a little to just 3.8% in May from 3.9% in April. The U-3 jobless level is sitting at its lowest position since the first year of this century, 2000.

The same is true for U-6, which adopts the broadest definition of unemployment in the labor force. U-6 encompasses individuals working part-time who would rather be engaged full-time.

It was non-residential specialty trade contractors who made the biggest contribution to the sector’s staffing climb in May, +15,000 jobs.

Construction is continuing to lead most industrial sectors in earnings gains. For all construction workers, including supervisory personnel, May’s year-over-year compensation increases were +3.2% for average hourly earnings and +4.3% for average weekly earnings (from Table B-3 of the BLS report). Not including bosses, the climbs were even stronger, at +3.6% hourly and +4.7% weekly (from Table B-8).

Still, it should be noted that wages overall are creeping upwards and there are justifiable reasons, that will be further elaborated deeper into this article, to be concerned that inflation is warming up as a possible prelude to a full-scale boiling over.

As an aside, Table 4 of the Situation Report records unemployment rates for various levels of education. For workers with less than a high school diploma, the jobless rate is currently 5.4%; for high school graduates, but no college degree, it’s 3.9%; with some college or associated degree, 3.2%; and with a bachelor’s degree and higher, 2.0%.

Enrolments at universities and colleges have recently been faltering because it’s so easy to find well-paying work. Nevertheless, the unemployment rates for varying levels of education confirm there still are advantages to seeing one’s academic aspirations all the way through to completion.

In goods production, manufacturing also had a solid month of jobs creation in May. Payrolls on production lines swelled by +18,000 jobs. Average monthly manufacturing employment in America is now +23,000 jobs year to date, versus +13,000 through the fifth month of last year.

The number of workers with ‘legal services’ firms, as it has for a long time now, stayed flat.

More jobs and lower personal income taxes should be providing a super-charged boost to the economy. Increasingly, however, there are forces working to dampen the mood.

Consumers are facing headwinds that are buffeting and blunting their tax reduction windfalls.

Borrowing and mortgage interest rates are climbing. The cost of gasoline is on the rise. Earlier tariffs elevated the prices of lumber and refrigerators. The expense of buying a new or existing home and stocking it with upgraded appliances has become more prohibitive.

New tariffs of 25% and 15% respectively are being imposed on steel and aluminum imported from Canada, Mexico and Europe. As a result, the price of beer in cans will be boosted.

Motor vehicles will become pricier. Most construction will be adversely affected.

The major producers of steel and aluminum in Canada have their headquarters in the U.S.

U.S. steel and aluminum companies may realize higher revenues from their domestic sales due to the tariffs, but they’ll suffer offsetting losses from the operations of their foreign subsidiaries.

The U.S. is riding high on the jobs front at present, but the unleashing of protectionist trade measures with unknowable consequences − i.e., targeted nations are sure to retaliate − risks putting the skids to the good times.

As a final comment on the U.S. jobs situation, there are four year-over-year percentage changes worth noting. Total jobs are currently +1.6%; services-providing jobs, +1.7%; manufacturing, +2.1%; and construction, fastest of the lot, at +4.1%.