After a stretch of several months earlier in the second half of 2017, when many of the Census Bureau’s sub-category put-in-place (PIP) construction spending numbers stalled, some sprightlier results were recorded once again in November. 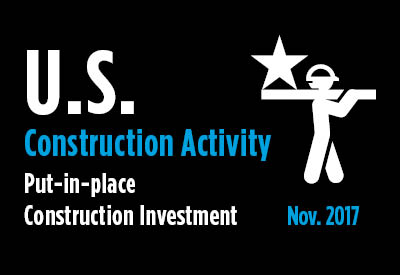 Given that 11 of last year’s 12 months have now been measured, the 2017 over 2016 year-end percentage-change for total construction will almost certainly be close to +5.0%. All the increase will have originated in the residential sector, +11.0%, with non-residential remaining flat.

It’s important to note, however, (i.e., from accompanying Table 1) that with respect to latest three-month results, non-residential work has been staging a comeback. For latest 3-months over previous 3-months (annualized), ‘total’, residential and non-residential are almost the same, only slightly below +9.0%

The percentage levels and changes in Table 1 are based on the Census Bureau’s seasonally-adjusted (SA) November 2017 and earlier put-in-place construction statistics. ‘Put-in-place’ as a concept is meant to mirror work-in-process or progress payments as projects proceed.

In the final two columns, if there is no check mark in the cell, then the type-of-structure category has stayed within 1.0%, up or down.
A negative that becomes more negative is considered to be 'slowing down'; if less negative, then 'speeding up'.

In the comparison of latest-3-months versus latest-12-months, 7 of the 16 sub-categories of construction ‘slowed’ in November, while eight ‘speeded up’. In other words, there was a mildly positive balance.

Especially striking from the above paragraph are the super-charged latest-3-month results for ‘educational’, ‘public safety’ and ‘transportation’.