The Bureau of Labor Statistics (BLS) has just delivered a ‘sit up and pay attention’ moment. Its September Employment Situation report records a month-to-month deterioration (-33,000) in the total number of U.S. jobs for the first time in seven years, dating back to September 2010 (-52,000). 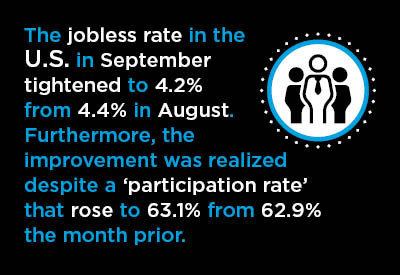 Before economy watchers start gnashing their teeth or bemoaning too loudly, the BLS is quick to point out that there was a special circumstance – horrific weather – that caused the employment downfall.

The jobs numbers are derived from a survey of payrolls. Employees in Texas and Florida who missed receiving paychecks early in September due to the fierce onslaughts of Hurricanes Harvey and Irma were accorded out-of-work status.

Hence, September’s jobs numbers fell prey to two unique but in many way twin events. There will almost certainly be distortions in October’s numbers as well, but in the opposite direction, as rebuilding rebound effects come into play.

The unemployment rate comes from a different data stream than the payroll survey. It is based on a canvas of households. The jobless rate in the U.S. in September tightened to 4.2% from 4.4% in August. Furthermore, the improvement was realized despite a ‘participation rate’ that rose to 63.1% from 62.9% the month prior.

The impact on employment of the dual storms can be seen most clearly in the ‘leisure and hospitality’ sector. The number of jobs with ‘food services and drinking places’ plunged in free-form style (-111,000), although the expectation is that the sharp decline will prove to be temporary.

It should also be noted, though, that there were several other sectors that delivered fewer jobs than normal during the latest month.

Jobs creation in ‘professional and business services’ has managed a monthly increase in excess of +40,000 on average over the past couple of years, but its September performance was only +13,000.

‘Education and health’, which has often seen monthly employment gains of +50,000 or more, added to staffing by only +27,000 in the latest month.

Construction’s total number of jobs rose by +8,000 in the past month, while its unemployment rate stayed level at 4.7%. Twelve months ago, the on-site jobless figure for ‘hard hat’ workers was 5.2%.

Construction’s average monthly increase in employment so far this year has been +14,000, up from +11,000 during the same January-to-September timeframe of last year.

Hiring at ‘building material and garden supply stores’ was relatively muted in September, +5,000. Reconstruction in the southern U.S. should bump the number up in October.

Jobs with ‘insurance carriers’ had a nice swing upwards in September (+11,000) and the momentum is likely to be maintained in the months ahead.

A long-anticipated acceleration in earnings may be gradually making an appearance, but its slow pace of improvement is failing to impress.

Both average hourly and average weekly earnings for all workers in the U.S. economy climbed by +2.9% year over year in September. Construction workers did minimally better at +3.0%, both hourly and weekly.

For production workers only, excluding supervisory personnel, the all-jobs compensation gains were +2.5% both hourly and weekly in the latest month. The construction sector was a step ahead hourly, at +3.0%, but it stayed with the pack weekly, +2.5%.

On a year-over-year percentage-change basis, U.S. total employment in September was +1.2%.

Construction’s y/y employment, at +2.7%, is now outpacing all other industry sub-groupings, with ‘professional and business services’ in second place, +2.6%, and ‘education and health’ in third, +2.1%.

There are two important pockets of the economy where employee counts are on the decline: retail, -0.5% y/y; and ‘information services’, -2.8% y/y.

Government employment y/y is only +0.1%.

The negative volatility in the jobs report this time around, with out-of-the-ordinary upside potential waiting in the wings for October, will make it harder for the Federal Reserve to figure out when it should proceed with its next policy-setting interest rate hike.