U.S. South Strong in Jobs, but the West Dominates in Real Estate

Tables 1 and 2 accompanying this article provide insight into the residential real estate markets in nearly all of America’s largest (by population) metropolitan statistics areas (MSAs). The raw data for 49 cities has been calculated by the National Association of Realtors (NAR). 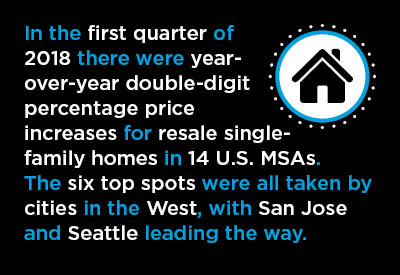 For two cities that would normally be included in the analysis, Detroit and Pittsburgh, the NAR does not issue numbers.

Table 1 ranks the 49 MSAs according to first quarter 2018 median sales prices for ‘existing’ (i.e., not ‘new’) single-family homes. Table 2 places in order, from speediest to slowest, the percentage changes in median sales prices from Q1 2017 to Q1 2018, for the same 49 cities.

In a previous article, it was established that the best labor markets in the U.S. are currently in the South Region. This current article makes clear, however, that the search for the hottest residential real estate markets will lead one to look left on a map, to the West Region.

More of the following commentary will employ Table 1 as a reference point rather than Table 2, but we’ll begin with the latter nonetheless.

Table 2 shows that in the first quarter of 2018 there were year-over-year double-digit percentage price increases for resale single-family homes in 14 U.S. MSAs. The six top spots were all taken by cities in the West. California alone accounted for four super-sized price hikes, beginning with San Jose’s astonishing +28.3% performance. San Francisco (+12.5%), Los Angeles (+12.3%) and Sacramento (+11.0%) were also eye-catching.

As shown at the bottom of Table 2, Philadelphia, PA was the only major city in America to record an annual decline in its median resale single-family home price in this year’s Q1, -5.8%.

Turning to Table 1, which ranks cities according to their most recent resale price levels, the dominance of the West is asserted even more aggressively. Nine of the Top Dozen priciest resale homes markets in Q1 2018 were in the West Region. Cities in California took positions one through four – San Jose, $1.373 million; San Francisco, $917,000; San Diego, $610,000; and Los Angeles, $545,500.

The width of the space that has opened between San Jose and other American cities on the home price front has become enormous. Consider that resale homes in San Jose are presently half again as expensive as in second place San Francisco and more than double what prevails in third place San Diego.

When the ranking numbers are the same, the cities are in a tie.
Figures are not seasonally adjusted (NSA).
Data source: U.S. Bureau of Labor Statistics.
Tables: ConstructConnect.