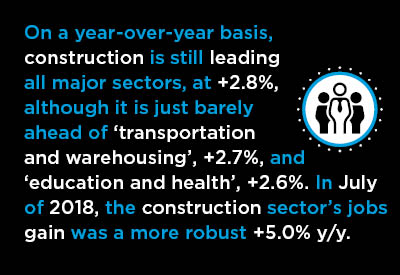 The unemployment rate continues to sit at an exceptionally low 3.7%. Inflation is a little less than +2.0% year over year. All in all, the U.S. economy is in extraordinarily good shape.

How is the Federal Reserve responding? It just lowered its key policy-setting interest rate by 25 basis points (100 bps = 1.00%). It has also suggested that further cuts are no sure thing.

Unorthodox economic policy, which is what currently prevails in America, seeks to restrain the growth prospects of the next largest economy, China, through the imposition of tariffs in order to win concessions on market access and protection of intellectual property. (Orthodox economic policy would pursue those entirely legitimate goals through behind-the-scenes negotiations.)

When the pursuit of unorthodox policy leads to slowdowns in Europe and China, there is talk of stimulatory interest rate cuts in those locations. This has led to pre-emptive action being initiated in the U.S. to weaken the value of the dollar and support the export sales of manufacturers.

Unorthodox economic policy would see an initial round of punitive tariffs imposed on Chinese goods be followed by next waves of ratcheting-higher tariffs, knowing the Federal Reserve will attempt to counter whatever negative fallout there may be through additional interest rate relief.

An erratic and less than independent Federal Reserve will not serve America’s best interests.

Manufacturing employment has turned in an even worse performance. Production-line jobs this year have averaged a meager +8,000 versus +23,000 in 2018, a decline of two-thirds (-66%).

On a year-over-year basis, however, construction is still leading all major sectors, at +2.8%, although it is just barely ahead of ‘transportation and warehousing’, +2.7%, and ‘education and health’, +2.6%. In July of 2018, the construction sector’s jobs gain was a more robust +5.0% y/y.

Construction employment is currently being hampered by a flatlining of housing starts and, as has been the topic of much discussion throughout the industry, an extreme shortage of qualified workers. The not seasonally adjusted (NSA) unemployment rate in construction in July was 3.8%, an improvement on June’s 4.0%, but a small reverse step from July 2018’s 3.4%.

In a couple of sectors, the year-over-year jobs record is now negative ‒ retail, -0.4%, and information services, -0.5%.

Government hiring over the past year has been unremarkable, at +0.4%.

Earnings Growth is Beating Inflation, but the Race is Unexciting

The average hourly earnings increase for all jobs in America in July was +3.2% year over year. The average weekly compensation climb was +2.6%.

Setting aside supervisory personnel and concentrating on production workers only, the average hourly earnings increase across all industries in July was +3.3%. The average weekly gain was +2.4%.

The latest published ‘all-items’ inflation figure for the U.S. was +1.6%, as recorded in the Consumer Price Index (CPI) report for June.

Earnings levels are generally rising faster than inflation, but the race is much less exciting than it should be this far along in the economic upturn.