On Valentine’s Day, Not Quite a Dozen Mid-February Economic Nuggets 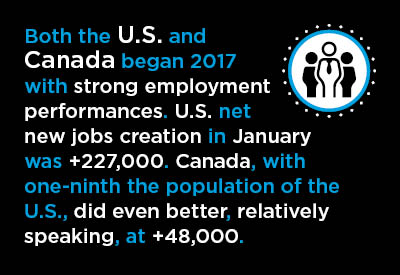 Furthermore, two weeks into February, all four indices are ahead by another 2% compared with their previous-month closings. Euphoria, based on decent (and often more than decent) numbers being reported for jobs creation, wage increases and gross domestic product (GDP) growth, combined with measures planned by the new administration in Washington to help business firms thrive through a paring of regulations, a lowering of personal and corporate tax rates and the building of new and repair infrastructure, has gripped investors.

With the foregoing as background, there are the following additional eleven economic ‘nuggets’ to be gleaned from the latest government agency and private sector data releases. (I usually set out twelve or more nuggets when I write my mid-month report, but this is February, home to Valentine’s Day and it seems inappropriate to apply the word ‘dozen’ to anything other than roses at this time of year.)

(3) U.S. year-over-year total jobs creation in January was +1.5%. If the economic locomotive were truly chugging along as smoothly and rapidly as possible, the total number of jobs created would be +2.0% y/y or more. As a point of interest, that yardstick was exceeded by services-providing employment in January, at +2.1%. Canada’s total jobs creation in January, +1.5%, was almost the same as in the U.S. The increase in services-providing jobs north of the border in January was an exact match with the U.S., at +2.1%.

(5) Canada is recording subsector employment buoyancy in several of the same industrial subsectors as the U.S.: ‘electronic shopping and mail-order houses’, +24.8% y/y; ‘warehousing and storage’, +10.8%; ‘computer systems design and related services’, +10.5%; and ‘telemarketing’, +5.9%. Such a large percentage gain for ‘electronic shopping’ (+24.8%) indicates that a lot of catching up and ‘getting with the program’ (i.e., the sometimes painful evolution from ‘bricks and mortar’ retail to Internet platforms) has been going on. There have been several other Canadian industrial segments with notable employment pickups including: ‘motor vehicle assembly’, +6.6%; ‘community care facilities for the elderly’, +6.5%; and ‘manpower/help-wanted service providers’, +5.0%. On the downside, ‘oil and gas extraction’ jobs in Canada have been -9.7% y/y.

(6) It’s interesting to compare U.S. and Canadian jobs gains in the social services area. Whereas the number of employed persons at U.S. elementary and secondary schools is +3.9% y/y, the comparable percentage change for Canada is just +0.8%. But the neighbor on the north of the border has the advantage in the number of jobs at ‘colleges and universities’, +3.7% y/y to America’s +0.9%. In hospital employment, the two countries align fairly well, with the U.S. at +2.2% and Canada, +2.8%.

(7) Branching further afield, lawyers and their assistants are encountering considerably better jobs prospects in Canada, +4.5% y/y, than in the U.S., +0.5%. The opposite is the case, however, for those engaged in ‘architectural and engineering services’, +2.2% in America and a rather dismal -4.6% in Canada. The latter number is unfortunate for Canadian construction, since activity in the design professions is a ‘leading indicator’ (i.e., with respect to a work-flow time line) for later on-site activity. (The number of construction jobs in Canada right now is +2.8% y/y versus America’s +2.6%.)

(8) The stronger-valued ‘greenback’ relative to the ‘loonie’ – i.e., it takes only 76 cents USD to buy one dollar CAD − is supposed to be a detriment to the export sales of U.S. manufacturers and a boon to the foreign shipments of Canadian goods producers. And, indeed, some of the implied currency effect is beginning to appear. Canada’s latest monthly merchandise trade balance (i.e., for December 2016) was slightly positive again for the second month in a row after spending 25 months in negative territory. A gradual recovery in some globally-traded commodity prices, with an uptick in oil especially welcome, is helping Canada’s trade balance. Nevertheless, Canada’s -2.2% y/y record in manufacturing jobs remains a steep step worse than America’s -0.4%.

(9) The U.S. Consumer Confidence Index (CCI) published by the Conference Board slipped a tiny bit in January to land at 111.8 compared with 113.3 in December. The Present Situation Index picked up, to 123.5 from 129.7, but the Expectations Index fell, from 106.4 to 99.8. The base level for the CCI is 1985 equal to 100.0, on the premise that sentiment in 1985 was neither jump-up-and-down optimistic nor sink-into-a-deep-funk pessimistic. The most recent CCI reading needs to be placed in context. At 111.8, it was still exceptionally positive given that, according to the Conference Board, December’s 113.3 was a 15-year high.

(10) Canadian housing starts in January, at 207,408 units, continued to stay remarkably close to the 200,000-unit level above which nationwide homebuilding is considered to be making a hefty contribution to the construction scene. The official residential groundbreaking number for 2016 was 197,915 units and for 2015, 195,535. And before we leave Canada, mention should be made of how well Quebec is now doing in the Labour Force Survey report. In January, the province’s unemployment rate dropped by 1.4 percentage points y/y to settle at 6.2% (i.e., less than Canada’s 6.8%). Also, Quebec’s total number of jobs rose the most, in nominal terms, among all the provinces, +97,100 − although its y/y percentage gain in employment, at +2.2%, was second to B.C.’s +3.5%.

(11) Finally, another source of optimism concerning the U.S. economy is to be found in the January Purchasing Managers’ Index (PMI) of the Institute of Supply Management (ISM). The PMI shot up to 56.0% in January from 54.5% in December. A PMI reading above 50.0% means both the economy as a whole and its manufacturing subsector are functioning with the aid of solid footings. (When the PMI lies between 43.3% and 50.0%, the economy is doing alright, but manufacturing is floundering; when under 43.3%, nobody is hosting any parties.) According to the ISM, a 56.0% reading has historically corresponded with a solidly upbeat ‘real’ (i.e., inflation-adjusted) GDP growth rate (annualized) of +4.0%.